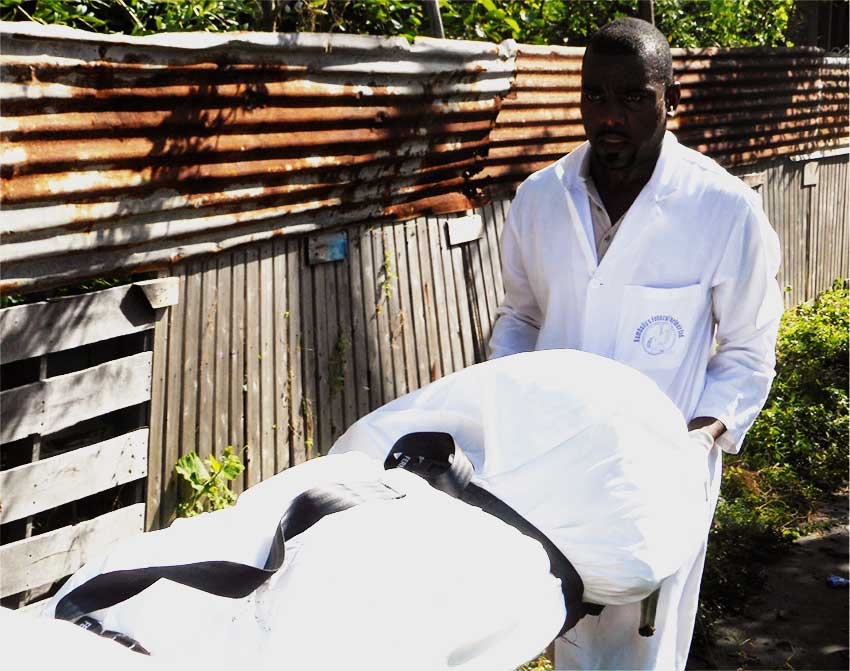 UP to press time no one has been arrested in connection with the triple murder in Bruceville, Vieux Fort, which has sent jitters in the community as residents try to cope with the chilling crime spree in the town.

Three men were gunned down last Saturday about 1:00 a.m. in a house which was at the time occupied by several individuals in what is seen as a well-crafted plan. A fourth person, a female, managed to escape the deadly attack when the gunmen stormed the building shouting “police” then riddled the men with bullets.

The men have been identified as David Raymond alias “Pumpkin” of Bruceville; Allan Norbert alias “Reese” of TiRocher, Micoud; and Christopher Henry of Babonneau

Residents say they heard between 10 to 15 bullets fired and stayed in their homes as the hail of gunfire rang out throughout the community causing panic.

The bodies were removed from the crime scene about 8 hours after the incident because of the time it occurred.

According to Inspector MarcellinusLeonce of the Vieux Fort Police Station, the police arrived on the scene immediately after receiving the report of the shooting, but had to secure the crime scene and return later due to poor visibility.

They have not been able to establish a motive for the incident.

According to one resident, who lives a few metres from where the incident occurred, just before the incident she heard people talking as they passed in a track near her home but could not properly hear what they were saying. She said moments later, she heard someone shouting “police” then a number of gunshots fired.

Another resident said the house where the incident occurred always had strangers.

“Every day, there are strange faces in an out of the house who people in the area do not know,” she told this reporter.

She said that the gunshots were followed by a period of calm, adding that it took some time before residents came out of their homes to see what had happened.

Katrina Charles, the adopted mother of Norbert, one of the victims, said she has no idea why someone will want to kill Norbert. She said she and other members of his family had constantly advised him to stop going in the area because it is not a good place.

“We always warned him about going there…and the type of people he limes with,” she said.

Hours prior to the incident, there was a report of another shooting in the community during which a man was shot in the leg.