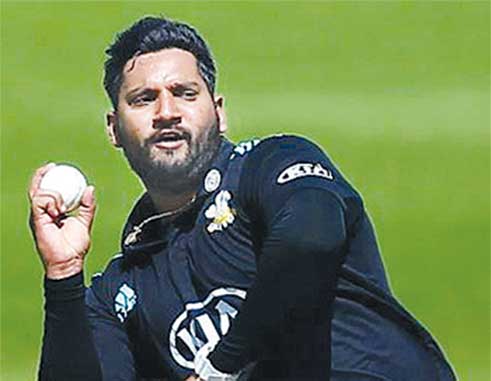 RAVI Rampaul, the former West Indies fast bowler, has signed for Derbyshire on a three-year contract. Rampaul has been playing in county cricket with Surrey for the past two years and does not count as an overseas player due to his Kolpak status.

Rampaul will be available in all three formats as Derbyshire look to continue their rebuilding under Kim Barnett, who came in as Director of Cricket last year before taking on an advisory role at the end of the season.

“We identified new-ball bowling as an area we wanted to strengthen for 2018, and we’re delighted to secure someone of the calibre of Ravi,” Barnett said. “He is highly skilled and vastly experienced, with over 100 internationals under his belt, and he will give us the additional firepower we needed alongside the likes of HardusViljoen and Will Davis.

“Ravi will be available for all forms and has committed to Derbyshire full-time, ruling out any clashes with the CPL during the English domestic season. It’s a massive coup for the club and shows our intent that we want to build on the progress we made in 2017 and kick on in 2018 and beyond.”

Although Derbyshire finished eighth in Division Two of the Championship, they did enjoy a successful NatWest Blast — under specialist T20 coach John Wright — reaching their first quarterfinal in 12 years. Rampaul, a World T20 winner in 2012 who also has experience of the IPL, can be expected to bolster their white-ball attack.

Despite not being a regular during his time at The Oval, he claimed 59 wickets overall, including 18 in this year’s Royal London Cup as Surrey reached the final. Rampaul last played for West Indies in 2015, having been capped in 18 Tests, 92 ODIs and 23 T20Is.

“I’m grateful to Derbyshire for giving me this opportunity to extend my career in England and play across all forms,” Rampaul said. “The club has ambitious plans for the years ahead and I’m excited by what we can achieve. Hopefully, I can play my part, not only on the field helping to win games of cricket, but also help the younger guys in the dressing room.”