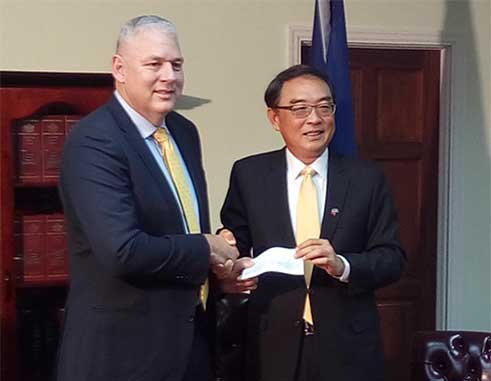 PRIME Minister Allen Chastanet has accused the former Labour administration of breaching the rules of engagement pertaining to the Constituency Development Programme (CDP) during its tenure in office.

Chastanet on Thursday told a gathering that included Taiwan’s Ambassador to St. Lucia, Douglas Cheng-Tsung Shen that the former administration got financing from Taipei for CDP-approved projects, but went ahead and approved projects of its own, financing those projects through loans from local financial institutions.

Chastanet said the projects were executed and contractors paid, but his government was faced with paying back the loans taken for the projects.

“So they (the former administration) went to two financial institutions, in particular, borrowed the money, and all the contractors were paid off the advancement of those funds. When we came in as a government, the resources that we got were going towards paying off those loans for the projects,” Chastanet said.

The Prime Minister made the remarks at a handing-over ceremony of the first set of CDP funds from Taiwan since he took office in June last year. The allocation received was US$5,303,993.04 (EC$14,258,194.09). Part of that money will go towards funding the government’s much-talked-about village tourism project expected to come on stream next year.

Chastanet spoke of plans to expand the CDP to incorporate larger projects, the village tourism project being one such expanded project, because of the linkages it creates that make it possible for more people to become involved in jobs related to the project.

The Prime Minister thanked Taiwan for its generosity to St. Lucia over the years, particularly in the areas of agriculture and constituency development, and spoke of the extensive dialogue on broadening relations and strategic alliances, especially as it relates to trade.

“Saint Lucia has benefitted enormously over the years from the relationship and it is difficult to go anywhere in Saint Lucia today and not see the footprint of this programme in terms of the sidewalks, sporting facilities…We all owe your country a debt of gratitude for what we have been able to achieve over the years,” said Chastanet.

He added: “We have looked at the relationship with Taiwan, as well as reviewed the programmes that we had, with a critical eye on how we can improve them. We have been receiving $10 million a year in grants and we need to ask ourselves whether, in fact, we have been spending those funds in the right way. The continuation of the community development projects has to be a core part of what we are doing, but we also think that we need to consolidate some of the funds into some bigger projects.”

Ambassador Shen noted that for the last ten years, the programme had completed more than 1,500 projects in the country and created more than 20,000 jobs.

“I believe under the leadership of your Prime Minister, your good government will use the best ways to create more jobs to complete more projects in the local communities,” he said, adding that the relationship between St. Lucia and Taiwan will get “stronger and greater”.

Senior Communications Officer in the Officer of the Prime Minister, Nicole Mc Donald, said the CDP has for years focused on social and economic programmes aimed at stimulating economic growth. However, with the receipt of this allocation, government will embark on the execution of more projects geared at enhancing and improving the way of life for constituents.