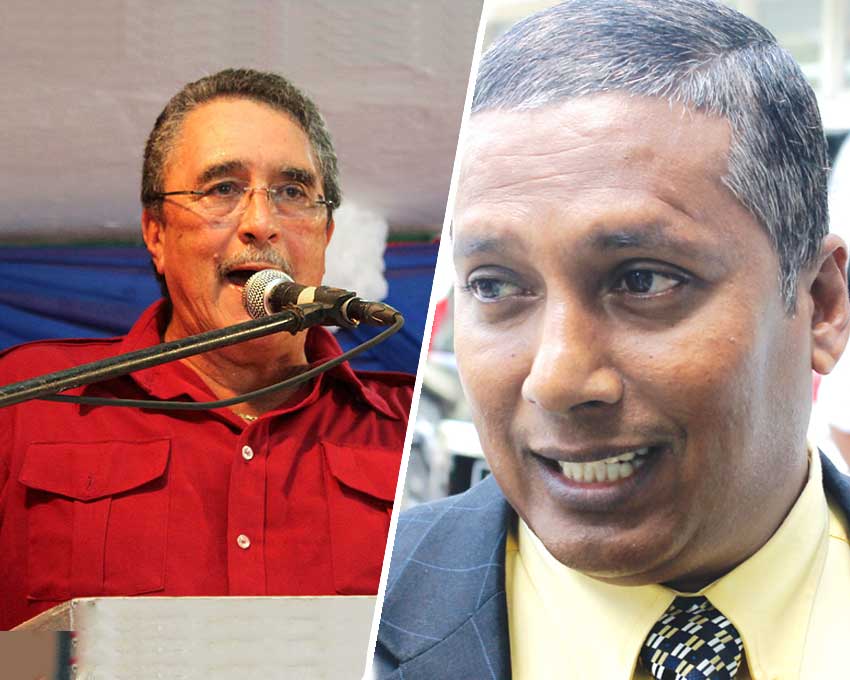 Both men called for the removal of Economic Development Minister, Guy Joseph, as the lead man on the hospital’s reconstruction.

Mondesir said the hospital project should be under the aegis of the Ministry of Infrastructure and not the Ministry for Economic Development while Dr. Anthony said Joseph seems to shroud the hospital’s reconstruction in controversy, mystery and mischief.

Both men’s recollection of events while they were in office makes for interesting examination. For instance, Mondesir, who addressed the meeting as “a concerned citizen of St. Lucia”, and was the Minister of Health when the fire destroyed the hospital and its reconstruction phase until demitting office in November 2011 when his party lost the general elections that year.

“We engaged first the American military’s Corps of Engineers to come give us an assessment of what we should do,” Mondesir said, referring to the period after the September 9, 2009 fire that gutted St. Jude Hospital.

“They said to us these walls (of the hospital) are thick, do not interfere with them; if you interfere with them, you will have to break the whole thing and it will be quite costly. We engaged the Taiwanese, who came down with a team.

“I remembered on, two occasions, when the Taiwanese came in and showed us plans they drew. These plans are there.”

However, Mondesir’s indication that plans for the hospital exist contradicts with sentiments expressed by Joseph, who this week said plans depicting the reconstruction of the hospital did not exist.

“When we assumed office in November 2011, we decided it would not be a wise thing to terminate the contracts of those who were in charge of the hospital project. We felt if we had to do that, it would cause unnecessary delays in the continuation of the project,” Anthony said.

He said that upon taking over the hospital’s reconstruction soon after entering office in November 2011, his administration ran into problems. The first problem was finding the money to complete the hospital since the $35 million allocated by the previous government in the budget was not enough.

“It was very clear we could not build St. Jude with $35 million or $40 million. All the delays we had was in finding out where to get the money for the hospital,” Dr. Anthony said, adding that he was under pressure from the public to finish the hospital which had no preliminary costing.

Dr. Anthony said his administration had to borrow money: one such loan was from Taiwan of US$20 million for completion of the hospital.

“But things did not work out very smoothly. The principal problem we had was the relationship between the workers and the contractor,” Dr. Anthony said.

According to him, the contractor was terminated because of complaints by workers of not getting paid and there was great dissatisfaction on the site. This, he said, hindered the hospital’s progress.

Other problems hampering the project were the absence of approval from the Development Control Authority (DCA) for the designs associated with the various constructions taking place on the hospital’s compound but Dr. Anthony said this was handled.

The hospital cannot be completed without buildings to house the laundry, pharmacy, generators, its dead and other needed services. All these have to be built and took time adding to the delay.

Dr. Anthony said that contrary to Joseph saying there were no plans for the hospital, the government Joseph was part of in 2011 had designs for the hospital. He further questioned the firing of the project’s manager, Shanta King, by government, which hired her in the first place back in 2009.

King, Dr. Anthony said, is the person with the most experience on the project and that firing her means government will not be able to get answers to the questions being asked, even by Joseph himself.

“Why fire her,” Anthony asked.

Meanwhile, Senior Communications Officer in the Office of the Prime Minister, Nicole Mc Donald, said government is looking at completing the hospital and is presently viewing several options in that regard.

Local architect, Mark Hennecart, has joined the controversy brewing over St. Jude, pointing to the complexities involved in constructing a hospital and the fact that hardly much of the difficulties associated with building such a facility were taken into consideration when the nod was given to start the reconstruction in 2009.

With Prime Minister Allen Chastanet making it clear that government will be going to court to seek accountability for the alleged EC$118 million already spent on the hospital, which today is nowhere close to completion and talk of millions more needed, the controversy surrounding the multi-million facility appears to be just warming up.

However, Mc Donald disagrees that the project should be assigned to the Ministry of Infrastructure’s portfolio, saying that the project was always that of the Economic Development Ministry, even during the time of Dr. Anthony, whom, she said, caused the mess in which the hospital is in today.