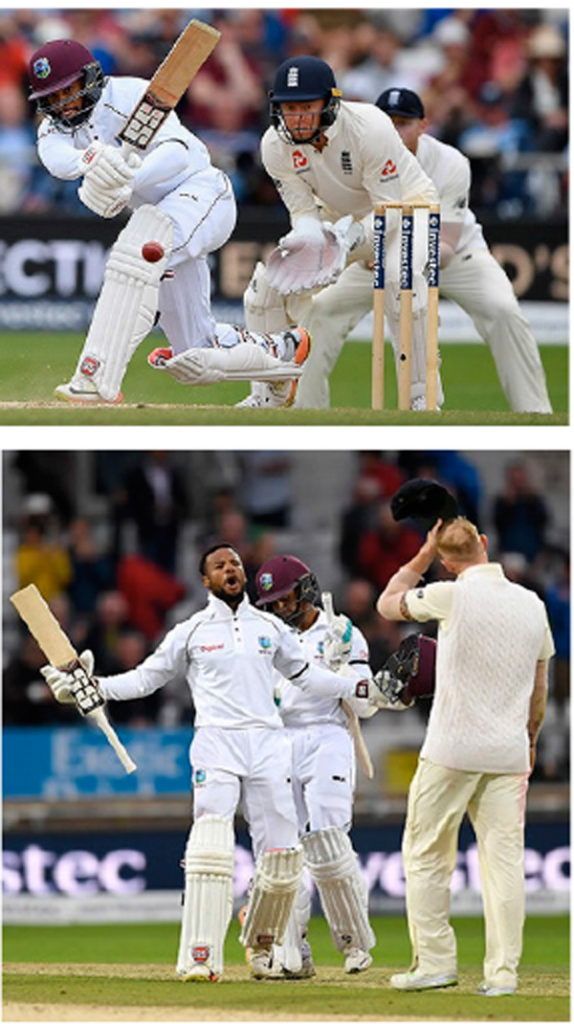 IT has been described as one of the great Test matches. Headingley (Leeds) has seen some remarkable final days, but the Jason Holder-led West Indies team has created their own extraordinary tale as they chased down 322 runs in 91.2 overs to level the three-match series on day five of the second Test against England after losing the first Test inside three days last week by an innings and 209 runs.

Top order batsman Shai Hope achieved what Kraigg Brathwaite narrowly missed, becoming the first batsman to score a twin hundred on the ground in first-class cricket and with the floodlights illuminating the ground almost as much as the day-night Test last week, Hope tucked the ball through square to complete one of the most unexpected redemption stories in the game’s history; he remained on 118 not out off 211 balls with 14 fours at a strike rate of 55.92; his 100 coming off 175 balls with 13 fours.

Such was the application and skill of the West Indies batting, anchored by the 144-run third-wicket stand between Kraigg Brathwaite and Shai Hope, once they got through the morning session, that the prospect of victory was closer than many would expect.

There was constantly talk of how quickly it could change, knowing the inconsistency in the batting, but the collapse never came. The West Indies resumed the final day on 5 without loss and at tea, moments after losing Brathwaite for 95 off 180 balls with 12 spanking four, the Windies needed 123 off 35 overs; when Roston Chase was superbly caught by substitute Mason Crane at mid-on for 30 off 58 balls, they needed 76 off 19.5 overs.

There was a chance with the new ball looming and the light fading that it could still unravel for West Indies, but Chase’s wicket may actually have helped. He was finding the old ball hard to time and it brought in Jermaine Blackwood who chanced his arm (or batted normally for himself).

He clubbed two tension-easing fours before hammering James Anderson’s second ball with the new ball straight for six. He was eventually stumped by wicketkeeper Jonny Bairstow with two runs needed but his 41 off 45 balls at a strike rate of 91.11 ensured England never regained a foothold.

The two teams will meet again for the third and final Test at Lord’s starting on Thursday, September 7.