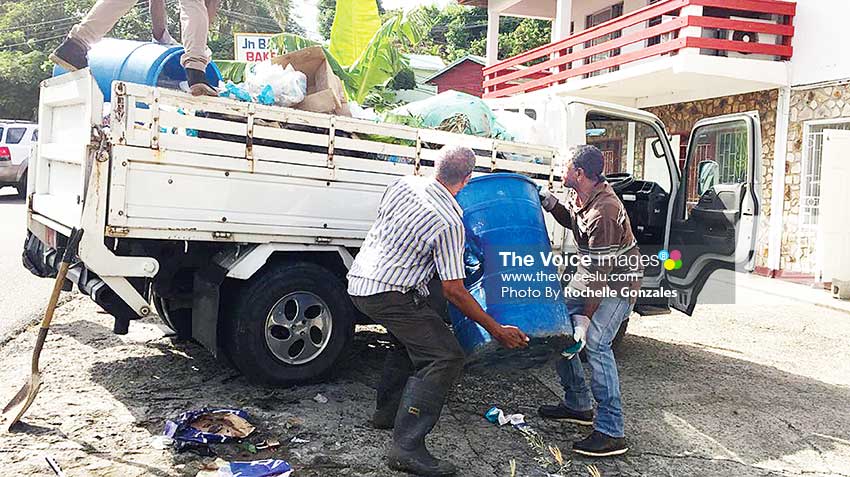 A GROUP of concerned citizens has taken matters into their own hands literally to ensure that their community remains clean and garbage-free after experiencing nearly one week of no garbage collection services.

Residents of White Rock in Grande Riviere, Gros Islet came together this week to remove piles of garbage from the roadside in their community, doing the job which should be provided by the St. Lucia Solid Waste Management Authority (SLSWMA).

As the island prepared for the passage of Tropical Storm Harvey on Friday, as a precautionary measure, garbage collection that was scheduled for the same day was cancelled.

However, after waiting patiently for garbage collectors to make their rounds on the following day and into Tuesday this week with the same no-show results, residents said enough was enough, volunteered a truck and proceeded to do the job themselves.

One resident, who opted to be called simply Augustin, said residents felt this was a necessary step to take. “We are happy now that the community is tidy and we hope the next time we have that problem, the truck for the garbage shows up to clean up the place for us because we are paying our taxes for this.”

Augustin said this kind of occurrence is highly unusual; however, it is also highly unusual for their community to be unkempt and littered with garbage.

He said: “In this community, we care for each other. If we even see somebody going into somebody else’s yard without permission, we will take care of that. So right now, the garbage is our problem.”

Augustin urged residents in other areas to consider doing the same if they have any pride for their communities.

Shortly after speaking to Augustin, The VOICE also spoke to Cassian Henry, Zonal Supervisor of the SLSWMA, who assured that all of the necessary measures have been taken as of Tuesday and continued through Wednesday to see to it that the garbage collection service has been brought back to normalcy in all collection areas on the island.

Giving a reason behind the collection delay, Henry said: “We had the recent inclement weather from Friday that created a backlog because, remember the country was on shut-down as well. So that meant our operations at the landfill could not accommodate the incoming volumes of waste.”

He continued: “Our contractors had to curtail their services to the various communities.”

Henry said the organisation is aware of the inconvenience this has caused and is expecting normalcy to be returned by the end of today.

On the matter of the actions taken by the Grande Riviere residents, Henry said: “We commend that but that does not mean we’re not going to get back to normalcy.”

He went on to say: “As I said before, all the necessary measures have been taken. We’ve contacted our contractors and we’ve had them double up on their resources to bring the service back to normalcy.”

This was the first time that the White Rock residents undertook such a task.