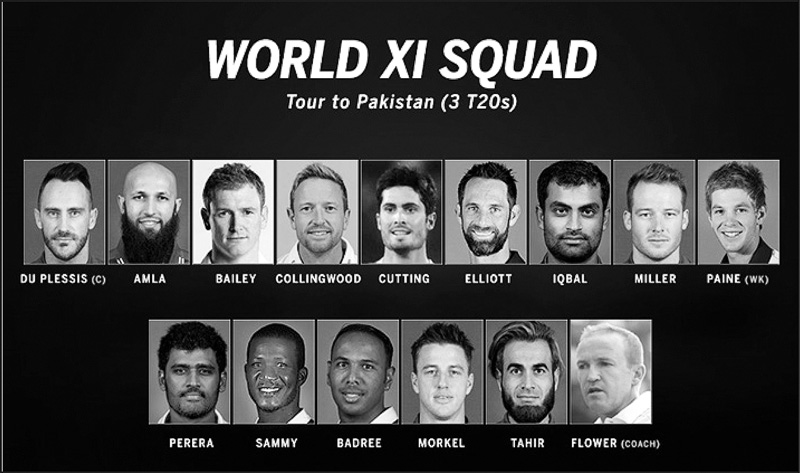 Faf du Plessis has been named captain of the World XI squad to travel to Pakistan to play three T20Is in Lahore next month. He will be joined by four South African teammates in a party that includes representatives from seven nations.

The three-T20 series, which has international status, begins on September 12, with the next two T20s to be played on September 13 and 15. Former Zimbabwe captain and England coach, Andy Flower, was announced as the coach of the World XI side.

Faf du Plessis said in a statement: “I am honoured to have been appointed as captain of such a diverse, attractive and well-balanced side. Like most of the players, I look forward to my maiden tour of Lahore and play my part in the safe and gradual resumption of international cricket in Pakistan.

“All the members of the squad have complete faith and trust in the assessment and judgement of the security experts who have assured us that there will be no compromise on the safety and security of all those involved in the series. But the bottom line is if we don’t feel safe, no amount of money would get us there. In this background, we will land in Lahore with nothing but cricket on our minds.”

“I am confident that through this tour of the World XI, the global cricket community, including players, media and visitors, will get a better understanding and perception of Pakistan, which is a peace-loving and extremely hospitable nation that loves its cricket.”

series potentially begins, for the first time in eight years, something resembling a home season in Pakistan, which has had monumental difficulty hosting international cricket since the terror attack in 2009 on a Sri Lanka team bus that injured several cricketers.

A one-off T20 against Sri Lanka in Lahore is in the works, followed by a three-T20 series against West Indies in November. Though PCB chairman Najam Sethi expressed a desire to see matches played in Karachi, it is likely all of those engagements, should they go ahead, will take place in Lahore.

Sethi, who announced the World XI squad in a press conference at the Gaddafi Stadium, made special mention of Giles Clarke, the chairman of the Pakistan task force, saying Pakistan was “indebted” to him for his efforts in bringing international cricket to Pakistan.

“I thank him from the bottom of my heart,” Sethi said, “and I know the people of Pakistan thank him for his relentless efforts in this direction.”

Clarke, for his part, announced his “delight” at the news, calling the tour “not only important for cricket in Pakistan but also for international cricket since it opens the possibility of other teams, media and sponsors visiting Pakistan for bilateral series.”

The ICC also welcomed the news of the World XI’s arrival, with chief executive David Richardson, saying: “The ICC wants to see regular international cricket being played safely in all its member countries and the World XI playing Pakistan in Lahore next month is a step towards that for the PCB. We are optimistic that this will be the next step in a steady and safe return of international cricket to Pakistan.”

The squad, while boasting a bevy of impressive names, is notable for the fact it has just one specialist fast bowler — Morne Morkel — even if a host of all-rounders and T20 specialists may offset that weakness. In any case, in these early stages of efforts to bring regular cricket back to Pakistan, the result of these matches is likely to be of far less consequence than the fact of their occurrence.