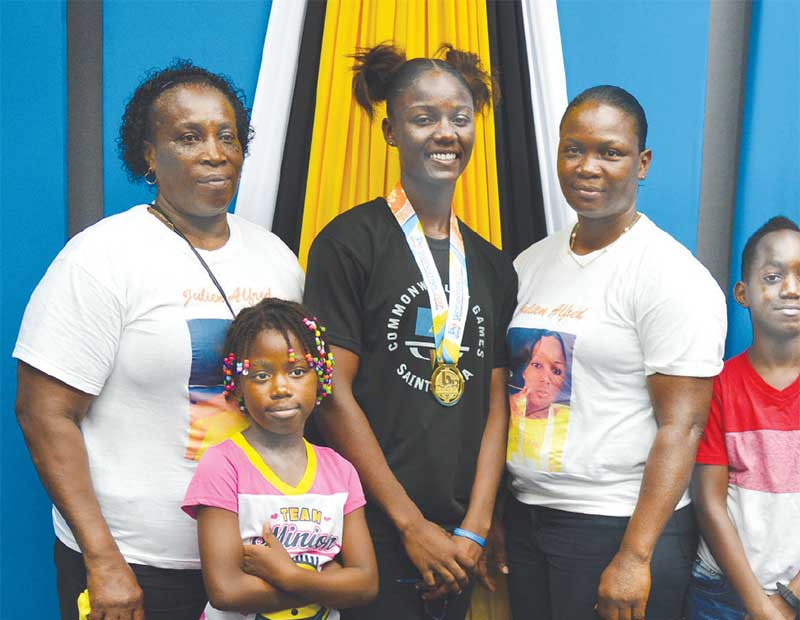 A small and excited gathering with national flags assembled outside the arrival hall of George F.L. Charles airport on Thursday to welcome home the athletes who represented Saint Lucia at the 6th edition of the Commonwealth Youth Games in the Bahamas.

The two gold medals that the Saint Lucian athletes won were the most ever at these Games since Saint Lucia first took part in 2008.

Acting Prime Minister and Minister for Equity, Social Justice and Empowerment, Lenard Montoute, was among those welcoming the team at the Financial Administrative Centre at Pointe Seraphine.

“It’s amazing,” Montoute said. “I think two medals for Saint Lucia against some of the big names in Europe and the Caribbean like Jamaica and Trinidad and Tobago is magnificent. This is a proud moment for Saint Lucia.”

“I feel good for them, they worked hard and it paid off. I see this as an outstanding accomplishment,” Montoute added. “Those of you who did not succeed in winning medals, you, too in your own right are champions. You have represented Saint Lucia and distinguished yourselves.”

He continued: “To our champions, special congratulations to you. We as a nation share in the pride and glory you have achieved for us as a country and to be a champion is an outstanding accomplishment.”

He urged the athletes to recognize that their journey continues and that they should stay on the right path.

Montoute said that while government can never do enough, he pledged government’s commitment to more than what it had done in the past by correcting some of its shortcomings and to play its role in facilitating sportsmen and women.

He said: “Today marks the beginning or continuing journey for all sports in Saint Lucia. While the SLOC has been the governing body responsible for coordination of a number of international activities, we are mindful that the time has come for us to call on other private individuals to ensure the continuous development of all twenty national federations that are going to be placed at the forefront of the development agenda.”

“We are convinced that through sports, the youth can be given a fresh start as the SLOC was able to raise in excess of $200,000 for this journey and by the time we settled, it may climb to $290,000,” he added.

Cooper said it was the SLOC’s intention to continue seeking assistance from government and the private sector in order to ensure that all national federations continue to participate or train their athletes for the necessary journey.

“What it means is a simple theory: once we train hard, we work together as one organization and as a country, we can achieve every single goal that we set ourselves to,” he said.

He continued: “We continue to pledge our commitment to every single athlete. Once you begin to show your commitment through the development of your respective sport and your member association, we stand ready to assist you, no matter what the cost.”

Among those coming home with a medal were 16-year-old Julien Alfred, who stunned the other seven women in the 100-metres finals to win in a time of 11:56 seconds, and the beach football team who whipped favourites Trinidad and Tobago 6-2 in the finals.

“I went into the finals with a lot of confidence and focus. I’m very happy for the gold medal. I am very happy with my time of 11:56 seconds,” Julien told The VOICE.