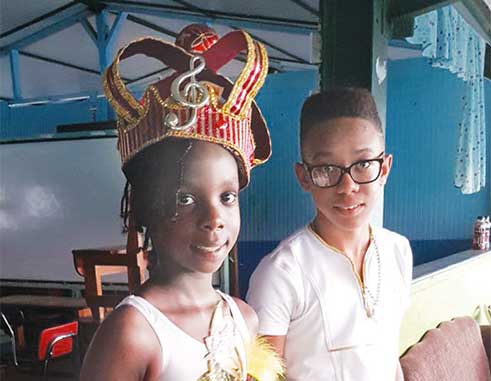 THE girls from Ave Maria Girls Primary School showed that they know how to put on a show and bring the good vibes when they celebrated the fifth annual Ave Clash last week Saturday.

The event was held at the school’s compound and featured 15 girls who competed: five girls competing in each of the three segments — Groovy Soca, Power Soca and Calypso.

Claudine “Sparkle” O’Neil walked away with the calypso crown for her “Change de Culture” while Keyanda “LMNTrix” Lionel won the power soca segment with her “Bend Up Your Back” and Krystal “Lil Krys” Bailey winning the groovy segment with “I Know What I Doing”.

Throughout the show, there was a variety of acts, including dancing, skits and, of course, singing.

Apart from Duncan, the show also featured a number of local acts, including Mysterio, and Kisha, who belted out her new track, “Low Key”.

Adeltrude Jn. Charles, Chairperson of the Ave Clash Committee, said the show was well-attended and all went smoothly in terms of organisation, performances and execution.

She said the response from patrons and especially students has been great and that from year one, the students have been waiting anxiously every year to take part in the event.

However, Jn. Charles said there was one hurdle which the school is still trying to clear — the matter of expenses associated with hosting the event.

Jn Charles said: “This year’s show was a lot harder because since we brought Aaron down, this meant that we needed extra money, sponsors and support so that we could have enough to deal with all of that.”

She is appealing to anyone willing to lend a hand to do so as soon as possible: “We’re still in a squeeze and if anybody still wants to help, it’s not too late because we still have bills to pay. We had some parents who assisted very well, and the few persons who sponsored us, we are very grateful to them for that, because it really helped block holes here and there.”

Jn. Charles said that despite the school not being in a hurry to host events of this magnitude any time soon, it does plan on going down that route for special occasions like anniversaries.

However, students and patrons need not worry as she promised that future shows would be definitely as entertaining.

She said: “We definitely have a little twist next year that we don’t want to reveal right now. But I can assure you the show will be even more exciting next year.”