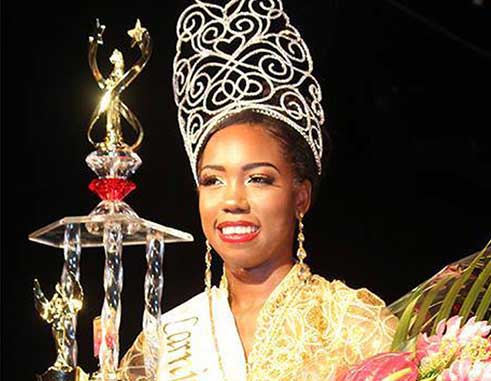 WHO can forget the night of Saturday, July 1 when all eyes were focused on the National Carnival Queen Pageant?

Many tuned in simply for the errors and drama that usually play a huge role in the event while others wanted to see the latest crop of local beauties hoping to win the hearts of the nation — and the judges, of course — and become carnival royalty.

This year, the drama was up to new degrees. However, in the end, a beautiful new queen, 20-year-old Chancy Fontenelle, was crowned and has already begun her year-long journey as the face of our tiny island home.

The art enthusiast showed the world that the humble, sweet and soft-spoken should never be underestimated as she blew many away with her dynamic triple threat talent, overall poise and consistency throughout the competition.

The former Leon Hess Comprehensive Secondary School student said she’s all set to take on the world and is happily jumping in head first to be the best queen she can be.

Here’s what she had to say about her journey so far.

The VOICE: You recently stole the hearts of the nation when you became the island’s carnival queen. You were in complete shock after your name was announced, but how do you feel now?

Fontenelle: I can now relax and take it all in. I feel like I can now settle in and accept the position and start making preparations to carry out my duties.

The VOICE: What does this win mean to you?

Fontenelle: This win spells out determination. There were many things that I was not brilliant at. However, I knew where I wanted to be so I worked on these things. It was never easy but at no point did I ever quit because I was thirsty for improvement. Having said that, determination is why I was able to come out victorious.

The VOICE: We all watched the events that followed when another contestant showed that she was clearly not happy with the results. How did that make you feel when you realised what was going on?

Fontenelle: I immediately put myself in her shoes. I thought that she worked really hard, she helped to put on an amazing show and she wanted that win. So to not capture it would have been quite disappointing and that is easy to understand, which is why I did not take this behaviour personal.

The VOICE: Has peace been made and the situation handled?

Fontenelle: Situation has been handled. The contestant and I have been in contact since the night of the show. I still consider her to be an outstanding performer with a lot of charm.

The VOICE: What about your relationships with the other contestants?

Fontenelle: The other girls and I grew stronger relationships, mainly because the show was finally over and the pressure was off our shoulders.

The VOICE: Since your big win, what has life as a Carnival Queen been like?

Fontenelle: So far, it has been an honour. It’s also exciting because I have met lots of people. Everyone wants to know the girl who captured the crown. It’s really heartwarming when I get to meet my supporters face-to-face.

The VOICE: Over the past few years, there has been a shift to get Carnival Queens to take on more responsibility and to really live up to the role. Are you aware of all that is to come and, most importantly, are you prepared for it all?

The VOICE: We have a history of Carnival Queens dating back to decades ago. What sets you apart from past winners and what can St. Lucia expect from Queen Chancy?

Fontenelle: I think what sets me apart is the fact that I had the ability to combine three of my talents for the talent segment in the competition. I am not sure if it has ever been attempted but I think being a triple threat was what made me stand out and the execution was neat. I wouldn’t have been able to execute it that way if it wasn’t for my wonderful team.

The VOICE: Finally, it has been said that the National Carnival Queen Pageant has become cliché and has run its course. What do you think of that notion and what would you say to try to change the minds and hearts of the people who think this way?

Fontenelle: I would like to say that the National Carnival Queen Pageant is a lot more than it has been advertised to be. I think it helps to shape young women; not only those participating, but those who are inspired by the whole image of pageantry. Yes, it involves looking your best but it also involves sounding your best. This is where intelligence comes in. Participating in this pageant has definitely built my intelligence and opened my eyes to the many social issues. This is where I now have to do my best, by finding ways to assist.