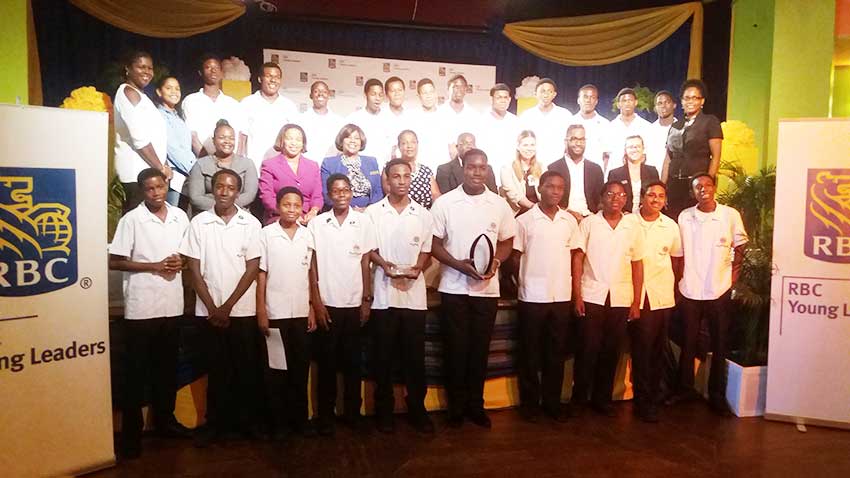 HUNDREDS of third and fourth form students were told yesterday that their future is now and that they are responsible for making a better St. Lucia through goodwill and leadership.

Students from Leon Hess, St. Mary’s College, Entrepot and Sir Ira Simmons secondary schools were given the message as they were being recognised by the Royal Bank of Canada and WE Schools for their efforts and participation in the WE Schools Programme.

The programme spanned one year and students were challenged to demonstrate the virtues of volunteerism with projects that made substantial differences in the lives of groups and communities.

During the ceremony, Trinidadian Senator/motivational speaker from WE Schools Caribbean, Nikoli Edwards, gave a powerful and moving speech that had the entire room’s attention.

While speaking about journeys he has faced in his 25-year life span, Edwards told students that the future is now and that even at their age, where they believe that no one is listening to them or taking them seriously, it is actually the opposite, and that they are very relevant.

He went on to say: “Know that while you may not be seeing the fruits of your labour today, in the future someone is going to benefit from knowing that you are who you are, and let that be encouragement for you.”

Isaac Solomon, Managing Director RBC Eastern Caribbean, said there was a range of emotions coming from both students and teachers alike to mark the sense of accomplishment.

He said RBC chose to partner with WE Schools to mark an evolution of the establishment’s philanthropic works with young people.

He said: “Because we were both doing the same thing, the plans for it fit to try to garner some synergies by partnering with WE in Canada…and now we’re bringing it to the Caribbean, simply to give you the best of the expertise and the experience that we had in Canada.”

WE Schools Representative, Marsha Doucette, echoed Solomon’s statement, saying: “WE Schools programme and RBC Young Leaders Programme are one and the same with the same mentality of empowering youth to change the world.”

WE movement, she said, is an organisation that empowers people to change the world both through local and global actions.

Doucette said: “We truly believe that young people have the potential to be leaders and to effect meaningful change within their communities as well as within the world.”

RBC’s partnership with WE Schools began in 2002 but expanded into the Caribbean just over one year ago.