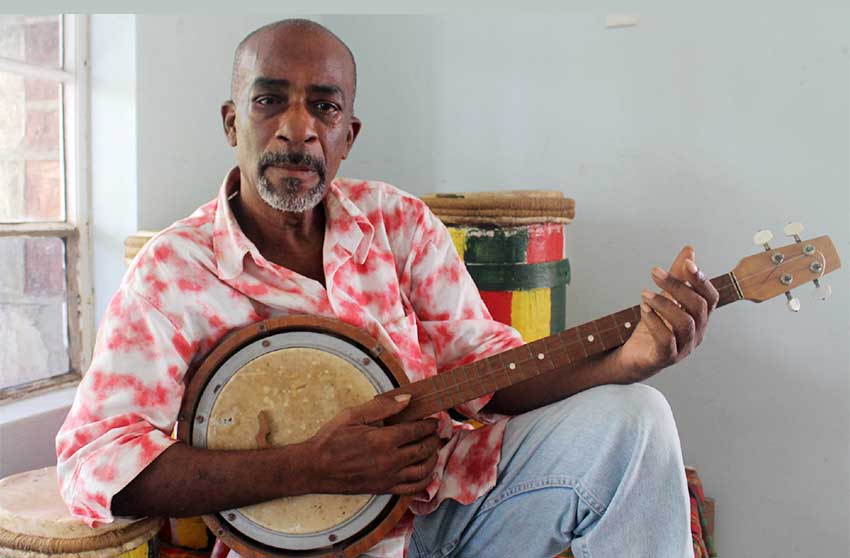 CULTURAL activist, George “Fish” Alphonse, has launched a campaign condemning the government for its decision to relocate the National Cultural Centre from its Barnard Hill home to make way for a courthouse.

Alphonse said this latest move by the government is an insult to culture, disrespectful to the legacy of former Prime Minister Sir John Compton, as well as to the French, who gifted the building some years ago.

Alphonse said he feels terrible about the fact that there was a lack of consultation between government and the arts community who utilise the space. He said even more disheartening is that government consulted with the courts and had even set a time-frame for the big move while leaving the cultural folks in the dark.

He continued: “They must be aware that the legacy of Sir John is very cultural. They might see it as political but the National Trust was started by Sir John, even the Folk Research Centre. Sir John provided funding for the FRC to buy that building. Sir John saw the vision in building the Cultural Centre where it is, as well as the Cultural Development Foundation and then the Cultural Department.”

Alphonse also highlighted the matter of economics which, he said, was grossly overlooked. He believes the move will do more damage than what has been conceived: “What they do not understand is the fact that there is a lot of economics around the Cultural Centre. The people from Barnard Hill, before we have a little show there, the vendors coming there are mostly from Barnard Hill.”

He said that over the years, he had heard many empty promises of building a better cultural centre, none of which were kept. He added that he will not sit by and allow the building to be moved and have the arts community remain without a home while waiting for a new one to be built.

He said: “They want to build a better place? My God! Build it first, then take me out. That’s the logical way! Build it first and if it’s better than all my tropical view up on Barnard Hill, then I may consider.”

He said the location of the Cultural Centre is important because it is within walking distance and easily accessible for people, especially those who live in and around the city centre.

The VOICE spoke to some residents neighbouring the NCC to get their impressions on the matter.

“I find it’s ridiculous. That’s the best place for the Cultural Centre. They could get somewhere for the courthouse!”

“It’s not safe for a courthouse here. This is a residential area and there are citizens that are around this area daily. It’s an issue to look out for because when people are coming from all over to attend court, who knows what they can get up to?!”

“The Cultural Centre is good where it is! Leave it there.”

“I don’t think this is the best place for a courthouse.”

“I never thought of the safety issue of a courthouse coming there. But now when I look at it, what will happen when one set of fellas meet another set that they don’t mix with? This is a residential area. Why here? They will bring big problems.”

The VOICE also sought comment from Senior Communications Officer for the Office of the Prime Minister, Nicole Mc Donald, regarding Alphonse’s concerns. However, she said it was too soon to give a definitive response to the claims being made.

McDonald said: “A definitive decision has not been made. Although the Prime Minister did mention it in his budget, the various stakeholders are still working out the details of this task.”

Contrary to Alphonse’s statement, Mc Donald said there has been an ongoing discussion on the matter.

Meanwhile, Alphonse said he knows he will be labelled as a political hack for speaking against the government on this matter, adding that the only hack he will confess to being is a cultural hack, where culture and country come first. As for politics, he said he can never allow politics to dictate his actions because politics has always shunned local culture.

Alphonse said $3 million was allocated towards Carnival in this year’s budget, which is incomparable to the $20,000 that has been allocated to the La Rose and La Marguerite Flower Festivals, even after 35 years of begging and pleading for more funds and support to be placed on the national events.

To add to the insult, he said that for the first time in over 30 years of CARIFESTA, St. Lucia will not be participating. This, he said, is clear evidence that the governments have no real interest in the national cultural arts.

He said: “The arts get this cold shoulder. That’s why it’s easy to move the Cultural Centre there because it’s the same lack of respect that goes all around for the arts. So even the venue, they could just take that away from you and go with it. They could just take it away without asking ‘Can I?’”