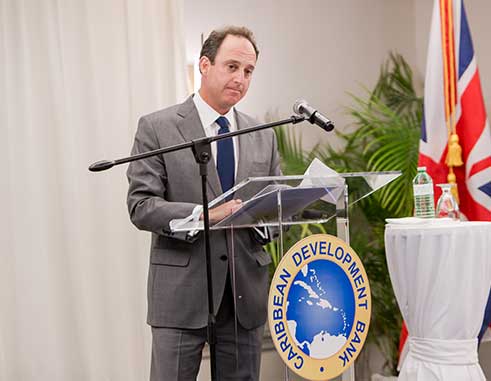 PRESS RELEASE – (PROVIDENCIALES, Turks and Caicos Islands, May 24, 2017) – It is time for the Caribbean region to think big about its small economies, says Deputy Chief Economist for Latin America and the Caribbean at the World Bank, Dr. Daniel Lederman. Further, small economies can be successful by being open and nimble.

Dr. Lederman delivered the 18th William G. Demas Memorial Lecture, which took place in Providenciales, Turks and Caicos Islands on May 23, ahead of the start of the Annual Meeting of the Board of Governors of the Caribbean Development Bank (CDB).

Joining a distinguished roster of speakers who have delivered the Lecture, Dr. Lederman spoke on the topic, “Thinking Big about Small Economies: From ‘Open and Nimble’ to Talented Workforce”.

The Deputy Chief Economist noted that the characteristic of being small helps ameliorate the volatility caused by fluctuations in global demand for specific goods and services.

He also spotlighted the issue of economic integration, acknowledging the legacy of William G. Demas, who often emphasised the importance of effective, not formal, sovereignty.

“His scholarly writings raised analytical issues related to the degree of openness of small economies, their patterns of trade specialisation, and the policy implications that often clashed with aspirations of sovereignty. But he persisted and stood by his conviction that deep integration arrangements can help small economies prosper,” he said.

Dr. Lederman is an economist and political scientist by training. He has published numerous books and articles on a broad set of issues related to economic development. These include financial crises, crime, political economy of economic reforms, economic growth, innovation, international trade, and labour markets.