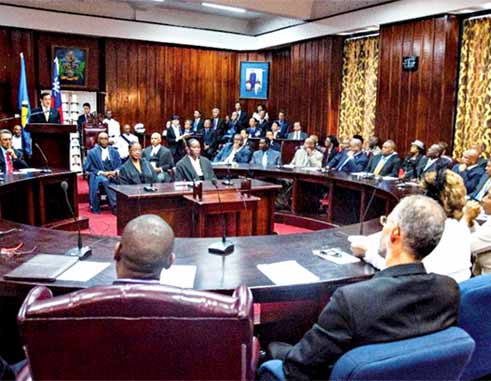 THE recent goings-on in the House of Assembly adds more fuel to the debate that Members of Parliament are by themselves making a mockery – and travesty – of the very democratic and other principles they swore to uphold as public officials.

Increasingly, it is becoming apparent that those who were entrusted with the people’s business of governance are more consumed by the pleasures of fame and trying to outdo each other with egos that have no place when matters of the State should take centre stage.

This year alone, there has been a walkout by the SLP MPs over what the party deemed a grave injustice after a motion put forward by one of its members was struck of the Order Paper overnight on the advice of the Prime Minister Allen Chastanet.

Also embarrassing is the fact that House Speaker, Leonne Theodore-John, having to remind Members – both seasoned and novice – on the use of the Standing Orders. Quite often, Members seem so hasty to rise on points of order albeit citing the wrong sections of the Standing Orders. But it gets worse, however, when Members continue to challenge the Speaker’s interpretation of House protocol, at which point she often issues another round of advice: that all Members become acquainted with the Standing Orders.

On Thursday, Leader of the Opposition, Philip J. Pierre, attempted to get the Prime Minister to confirm whether a document circulating in the public domain was indeed the Framework Agreement signed between the Government and Desert Star Holdings Limited (DSH) Chairman, Teo Ah Khing, last June.

The Speaker, who has on many occasions appeared to be at her wit’s end at the unbecoming behaviour on both sides of the House, eventually ruled that the document could be made a document of the House. But that long recess that was called that day, when fifteen minutes turned into nearly an hour, has raised many questions.

For starters, it would not be farfetched if one was to conclude that the Speaker might have had enough of the debacle that passes for Parliament. Secondly, that Parliament’s final day of the debate – yesterday – was deferred until June 20, just over five weeks away, leaves one to speculate that such a span might just be enough within which to find another Speaker, assuming she has indeed called it quits. Who knows?

No politician worth his or her salt should find it so easy to trivialize the business of the House where bills become laws, the very laws that we are expected to respect and obey. Moreover, given the dire straits in which we find ourselves burrowing deeper each day, our policymakers must pause and do some introspection as to whether they are indeed doing us a service that makes us better as opposed to a funnier laughing-stock.

Too often the citizenry’s attention gets dimmed from revelations about to be made in the House because some Member rises and interrupts the proceedings – citing the wrong section in the Standing Orders – and triviality ends up trumping truth. It’s time that our policymakers make it a policy to conduct themselves professionally and put an end to the smoke and mirrors norm.