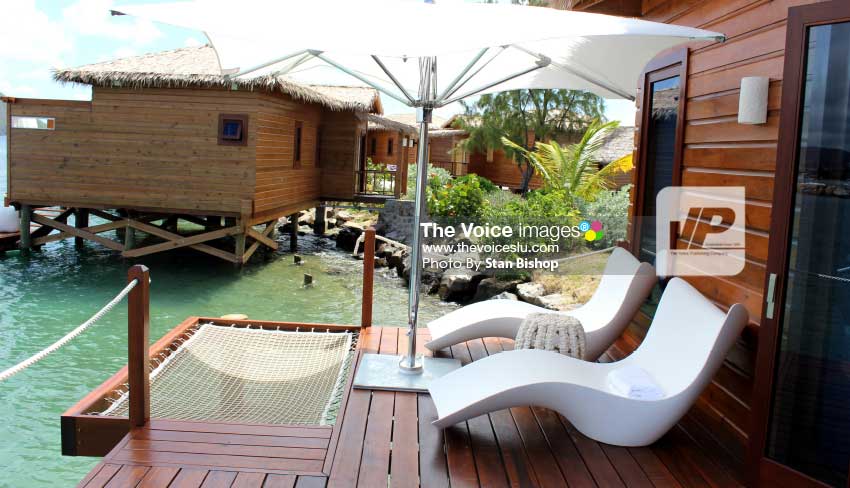 THE recent additional rooms at Sandals Grande Saint Lucian Spa & Beach Resort are already creating a buzz on social media with people far and near already planning on enjoying its comforts. However, their plans to experience such comforts will have to wait a few days longer.

Recently, the resort located at Pigeon Island Causeway completed construction of nine over-the-water bungalows situated over the water’s edge near the property. The rooms offer guests a scenic view of Rodney Bay and Pigeon Island. Guests can also lie on their beds and view the fishes in the sea via the clear reinforced glass portion on the floor.

Winston Anderson, General Manager, Sandals Grande Saint Lucian Spa & Beach Resort, told The VOICE that no effort and costs were spared in making the rooms “absolutely fantastic”. Each bungalow’s outer deck offers a relaxing atmosphere, including a step-down to get one’s feet wet in the ocean, doze off in the hammock or deck chair or soak in the hot tub.

“They are very comfortable and have the finest details,” he said. “Our bungalows are very unique in their own right and have taken elegance to a next level. They’re our most prestigious rooms on the property.”

The rooms come with a 24-hour butler service with each room having its own exclusive butlers who offer top of the line drinks and full 24-hour menu. Butlers also assist guests in planning their activities. Wide-screen television and free Wi-Fi add more excitement to the mix.

“The guests’ wishes are our command, basically,” Anderson said.

At the end of the slither of land housing the brown wooden bungalows is a conspicuously white chapel which seats 40 people, its décor creating the perfect ambience for weddings and other social events.

“We are expecting our first guests on May 15. However, we have been doing some testing by inviting a lot of travel writers and the press to come and experience them. So far, the feedback from our travel writers and social media is that people have been saying great things about us,” Anderson explained.

The new bungalows did not come without controversy. Criticism about their location came from many who felt that the marine life was in jeopardy and fishermen’s livelihoods were at stake. However, Anderson said the hotel chain did its best to ensure that all logistical guidelines were followed and relevant stakeholders apprised about the development. The final product, he said, is a plus for all concerned.

Said Anderson: “As with everything else, it took its time. But the way the world works, nothing happens before its time. The project was done following the necessary environmental impact study of the area. So a lot of thought went into it. The Gros Islet community, fishermen and everyone was dialogued with. So I think it was a win-win for everyone.”

He added: “Most importantly, it’s a tremendous win for Saint Lucia because what it has done is put a whole new focus on the destination and well-needed additional top of the line rooms.”

The official opening of the new bungalows coincides with the close of the Jazz Festival and the traditional lean period for hotels as far as occupancy levels are concerned. However, Anderson said the feedback so far and the bookings received have been good. He said that mindful that the summer and fall seasons were approaching, “we expect that it’s going to be good”. The bungalows, he added, targets a specific clientele.

“I don’t think it is necessarily the type of accommodation that would attract the jazz goers,” Anderson said. “What I think it’s going to do is bring a whole new market. It’s not going to take away from the other rooms because it adds so much and is really attracting a different clientele altogether to Saint Lucia.”

Anderson said the new addition to the Sandals property has created 35 new jobs for young Saint Lucians who were trained and certified as butlers.