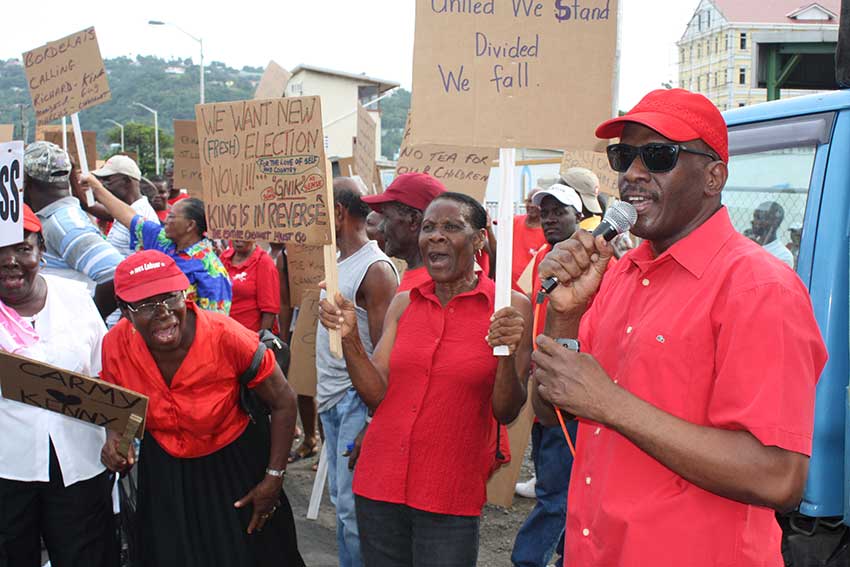 PRESS RELEASE – THE Saint Lucia Labour Party (SLP) has sought and obtained police permission to lead a peaceful national protest march in Castries on Wednesday (tomorrow) from the Sab Playing Field (commonly called Vigie Playing Field) into the city centre to be followed by a rally on the Castries Market Steps.

The SLP believes that it should be a cause of grave disquiet to us all that people and institutions who have expressed opposition to some of the Government’s decisions have become the target of attack and threats by members of government and known UWP surrogates, including the Prime Minister’s father. The SLP believes that this must not be allowed to continue unchallenged and condemns the actions of the Government in the strongest possible terms.

We have all witnessed Government’s vindictive response directed towards members and employees of the National Trust in response to the Trust’s disapproval of plans to establish a Dolphinarium at the Pigeon Island National Landmark and the construction of a causeway to link the Maria Islets to the Vieux Fort mainland.

Well-known St. Lucians who have over several years displayed their passion for protecting our natural environment and patrimony have been attacked by no less a person than the Prime Minister and accused of being political operatives.

Members of the Vieux Fort Concerned Citizens Coalition for Change (VFCCCC) have been singled out and verbally abused for expressing concern about imminent displacement of residents of the community, disruption of livelihoods and the wider implications of degradation of the sensitive and valuable ecosystems of the mangrove, coral reefs and Maria Islet in the agreement under which the Desert Star Holdings (DSH) project is proposed.

The local Catholic Church has been accused of being political by Sarah Flood-Beaubrun for expressing the concerns of the Church over possible negative social impact of the Desert Star Holdings (DSH) project and anxiety over the absence of adequate safeguards, for our country, in the agreement signed by Prime Minister Chastanet.

As the main opposition party in the country, we have a responsibility to lead a charge to cause government to change direction. The SLP is encouraged by the many voices raised in defense of our patrimony, and those raised against the impending disastrous consequences of the DSH agreement and the erosion of the democratic traditions of our country.

The Saint Labour Party is of the sincere belief that the DSH project as presently structured places St. Lucia at great risk and the negative fallout will have severe consequences for the people in the southern region and the country as a whole.

The SLP calls on all Saint Lucians, including the many workers who have lost their jobs, to heed the danger signals now and come together on Wednesday to demonstrate.