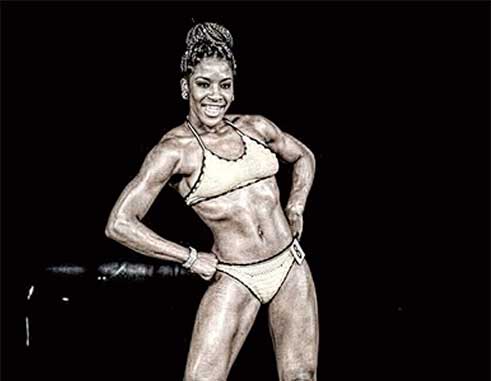 BUILDING a strong foundation can often begin with the smallest of ideas that gradually builds momentum that further precipitates the decision to transform that idea into action. Sounds easy, right? If it does, then you just might have ignored the fact that transforming ideas into achievements also takes a lot of determination, hard work and sense of purpose.

Twenty-year-old Rocheal Philip knows a thing or two about following her dreams and turning ideas into sucess. The Debreuille, Choiseul native who now resides at Vide Boutielle, Castries seems focused on getting the light on her career path to shine even brighter.

In July last year, she took up bodybuilding after joining a gym and her coach suggesting that she did. A month later, she competed in her first and only bodybuilding competition to date, the National Bodybuilding Championships, organized by the St. Lucia Amateur Bodybuilding and Fitness Association, placing fourth. She said that while nerves had nothing to do with the unfavourable results, she might have overstepped her boundaries.

“I’m never the type to be nervous, so I went out there and gave it my all,” she said. “However, my all was too much as I was putting out too many muscles.”

Philip works out at the gym for about an hour four days a week and her diet consists of her eating six times a day.

Philip is among the few female bodybuilders on island. She is also a rare phenomenon given her age. Nevertheless, her audacity to break into a sport at such a tender age has already attracted the attention of other youngsters whom, she said, follow her on Instagram and ask her for advice on how to get into the sport.

For now, Philip has her sights set on competing in this year’s National Bodybuilding Championships with hopes for better results and also competing in competitions on distant shores. But she admitted that wanting to succeed at her game comes with a level head and the will to remain on point.

“My only challenge would be getting up early on mornings to go to gym. However, my greatest strength is that I’m always active. I always feel energetic. I’m also always positive,” Philip explained.

For those of you who have been paying close attention to Philip’s humble rise to success, you would have noticed that she features prominently in an advertisement for Climax, the energy drink. Since being featured, she said, she has received great feedback from many people, prompting her to be more dedicated and confident about her talents.

“I believe you just have to find what you really love and do it,” she advised other youngsters still second-guessing pursuing their passions. “It may be bodybuilding for me but not the same for you. Just go out there with the frame of mind that you have to do what you have to do. I can see myself doing bodybuilding for the rest of my life, even when I’m old and grey.”

Philip, who attended Roblot Combined and later Choiseul Secondary, also has a passion for acting which, she admitted, started out in the most dramatic fashion but actually gave her the confidence to take it up seriously.

“Growing up, I always liked to act. I would often start crying and do things to surprise my parents. While I was in Form Two, we did a play at school and I realized that I truly was a dramatic person,” she said.

Philip and some of her schoolmates from Choiseul Secondary were chosen sometime later to participate in the Word Alive Festival held each year at Saamans Park. They performed a poem written by Yasmin Solitahe Odlum entitled “Last Supper”. They placed first that year.

At twenty, Philip seems poised to achieve her goals despite the imminent odds she would be forced to face. But having taken centre stage in two of her dearest passions – bodybuilding and drama – she knows that having a dream and achieving a goal are two different things. However, for this rising star, the sky is hardly the limit.

“For now, I’m settled on bodybuilding but I do intend to perform my own plays on Facebook. I like monologues, especially using an African accent,” she said.