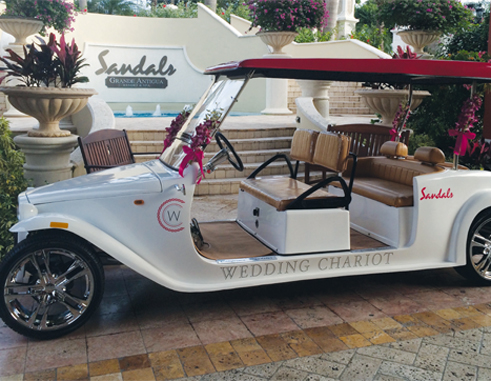 PRESS RELEASE – MARCUS Monrose is the Diamond Talent of the Year at Sandals Regency LaToc.

Monrose was crowned last Thursday at the resort’s 9th annual Prestige Awards featured in a vintage Hollywood setting. He was surrounded by hundreds of supporting team members, resort management from across the Sandals Saint Lucia group, and guests at the resort.

The Sandals Prestige Awards is held annually and recognizes the outstanding work of resort team members from the year previous.

Monrose, a Concierge Agent in the Club Sandals Department, has displayed an unmatched level of consistency in performance guest satisfaction.

He began his career with Sandals Regency at a caddy at the resort’s renowned nine-hole golf course and eventually elevated himself to the Club Sandals Department as a Junior Concierge Agent.

Monrose was promoted to the role of Concierge Agent just under two years ago – after consistently marveling his then department head Della John and earning a reputation of “the go-to man” among new and returning guests.

“I am really honoured by this. I am not one who comes to work looking for any kind of praise from my colleagues or our guests. I simply follow the mandate set out by our Chairman and CEO in exceeding expectations and going above and beyond the call of duty. I actually love my job, so it is less work and more joy for me to come here every day,” Monrose said.

Aside from his professional capacity at Sandals Regency, Monrose is one of the most active team members outside of the operation, constantly making himself available on social and sports clubs and off-resort activities.

Recently-appointed Elite Services Manager, Victor Regis, under whose portfolio Monrose operates, said he was honoured to have inherited such a “reliable” team member. Sentiments of Monrose’s aptitude echo throughout the resort.

“We are all very proud of him and grateful for his contribution every day to the success of our operation,” Regis said.

Hotel Manager for Sandals Regency LaToc, Stephen Husbands, in his opening remarks to last Thursday’s award ceremony, reflected on the challenges that faced the resort, especially during the latter months of 2016 and early 2017, which saw the mass exodus of senior talents considering personnel poaching activities believed to have been taking place in hospitality industry.

Husbands used the opportunity to wish those who have moved on continued success as they grow professionally and gain new experiences. But he did not forget to embrace those who recognized the value continued service and professional stability that exist within the Sandals Resorts group.

“We invest heavily in our team members’ development through the Sandals Corporate University and our in-house Training and Development team. Our team members’ capacity for growth extends beyond the confines of this resort; instead it stretches across all Sandals Resorts in Saint Lucia and the Caribbean. Thank you, all, for recognizing the value of our brand and for choosing to continue to grow as we grow,” Husbands said.

Other winners for the evening were Platinum Talent of the Year, Jonathan Sydney.

The Mover & Shaker or (Most Improved) award went to Shanissa Nestor; the Legendary Talent (Most Guest Nominated) to Agnes Joseph; the Circle of Joy (Smile & Courtesy) to Shane Janvier; Earth Guardian (Sandals EarthGuard) to Wally Mathurin; Sandals Foundation Sentinel of the Year Award (Sandals Foundation Community Spirit) to Victor Regis; Standing Ovation (F.C.’s Award) to Virginia Edward; Money Maker (Revenue Earner’s Award) to Justina Lionel-Joseph; Heart of the House (Hotel Manager’s Award) to GerohnAntal; Pacesetter Award (General Manager’s Award) to John-Ross Elliott; All Rounder (Supervisor of the Year) to Rosanna Sylvestre; MVP (Manager of the Year) to Seisha Simpson; The A Team (Department of the Year) to Landscaping; Eagle of the Year (Runner-up Caddy) Shervy Joseph; Hole in One! Caddy of the Year to Deslin Renee; and the People’s Choice Award to Kadian Joseph.