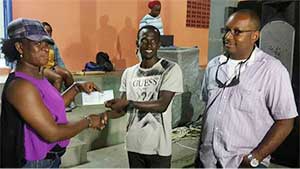 THE action continues over the weekend with the quarter-finals of the Saint Lucia Football Association sponsored Saint Lucia Sports Online national Under – 15 tournament as well as the Vieux Fort South League domestic games scheduled for the Phillip Marcellin Grounds.

Today in the VFS Football League from 6:00 p.m. Up Town will take on Stable Boys; while Platinum meets Victory Eagles at 8:00 p.m.

Tomorrow at 4:00 p.m. in the first quarter final of the SLFA/ Sports Saint Lucia Online Under -15 Tournament, Gros Islet will take on Soufriere. Later at 6:00 p.m. Venom Strikers will meet W. Mangue U, while at 8:00 p.m Knight versus Shamballa.

Meanwhile, come April 8, when the Vizions/Super League kicks off, Team Vieux-Fort South will be sporting a new football kit. This was made possible through the generosity of Gems of Saint Lucia and the Southern Taxi Company.

Prior to the start of Wednesday’s games at the Phillip Marcellin Ground, representative of Southern Taxi Company Francisco Jn. Pierre presented a cheque to the Vieux-Fort South Football League towards the purchase of a new set of uniforms for its senior male team.

Also present was Bradley Sadoo of O.B. Sadoo Engineering the official sponsor of the ongoing football tournament in the south. He presented the sponsorship cheque to the Vieux-Fort South League.

On the field Venom Strikers and Veterans played to a nil-all draw, while Gren Lake defeated Knights 2-1.