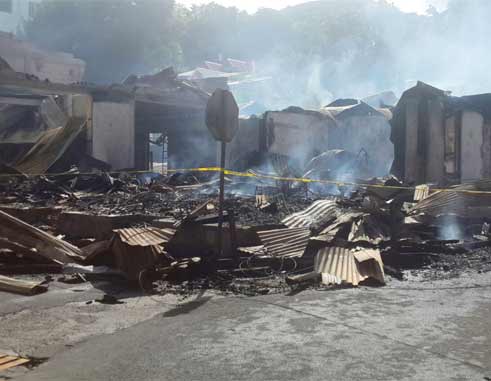 THE St. Lucia Fire Service (SLFS) is advising the public against lighting fires to clear property and to be particularly cautious when disposing of rubbish.

This comes after firefighters fought two major blazes over the weekend, a structural fire in Canaries and a bush fire in Vieux Fort, that resulted in damage to property and burns to the body of an occupant.

The fire service did not link the two fires to the clearing of property by fire but issued the warning in light of the dryness of certain parts of the country, adding that clearing property through such means could lead to disaster if not carefully managed.

“Permission must be sought from the Fire Service before any rubbish is burnt,” warned the department in a report issued yesterday.

The SLFS reported that Saturday’s fire in Canaries completely destroyed a wooden structure housing an 80-plus-year-old woman who sustained burns to her arms and legs and was transported via ambulance in a stable condition to the Victoria Hospital for medical treatment.

The Soufriere Fire Station received a call at approximately 10:25 a.m. informing of a structural fire at Canaries. According to the fire service, emergency personnel immediately responded to the Canaries fire and discovered the wooden structure engulfed in flames upon arrival on the scene. A request was then made for assistance from Fire Service Headquarters.

No other persons were reported injured as it relates to this incident.

“The Fire Service would like to commend the residents of Canaries for their quick action, which minimized the spread of the fire and averted a major catastrophe in their community,” the Fire Service said in its report yesterday.

On Sunday, the Vieux Fort Fire Station responded to a major bush fire at DerierreMorne, Vieux Fort. A report from the station said that smoke emanating from that fire affected aircraft operations at the Hewanorra International Airport. However, the report did not identify the type of aircraft operations that were affected. The VOICE understands that operations at the airport on Sunday were not affected and that everything went on without a hitch.