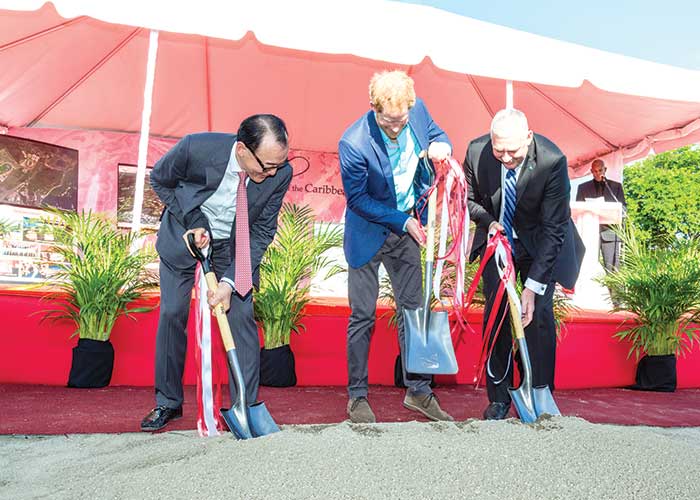 A Shame and a Scandal.

AS we continue in our race to the bottom, this Citizenship by Investment Programme is creating embarrassment after embarrassment for us, and every time we come to the point where we think that it just can’t get worse, it does. In a perverse sense, CIP has dispelled any remaining vestige of innocence in us, and we are now forced to face the fact that the power of our elected politicians is absolute.

The reporter’s follow-up question sought confirmation that, once finalized, the terms of the agreement would be made public prior to the agreement being signed, and again the Prime Minister’s response was that those terms would normally come to the Cabinet, and that once Cabinet had approved them, the public would be informed.

With a new administration, just a little over three months in office, there was no reason to question the statements by the Prime Minister, and coming on the heels of the CDB press conference on our economy, there was every reason to hope that we would now have transparency in the conduct of the government’s affairs. The passage of time, short as it might be, has confirmed that that hope was misplaced.

On November 25, 2016 a sod turning ceremony was held at Vieux Fort for the DSH project, and a press release by Invest St. Lucia three days later confirmed that the initial agreement between Government and DSH had been revised with a view to excluding the Mankôté mangrove. At some point subsequent to the signing of what has now come to be known as the Supplemental Agreement between Government and DSH on November 10, 2016, leaked copies of both the Framework and Supplemental agreements entered widespread circulation, and the Opposition commented on their contents on December 8, 2016.

Appearing on a talk show on the evening of December 8, the Prime Minister confirmed that the Agreement between the Government and DSH had indeed been leaked, leading the public to conclude that the documents in circulation were authentic.

In addition to the leaks of those DSH documents, sometime shortly afterward, a letter from former Prime Minister Anthony to an investor was also leaked and entered public circulation, with the contents of that letter being addressed by both the Government and the Opposition on January 05, 2017. In the poisoned political atmosphere generated by those leaked documents, the Editorial of this newspaper, in support of the comments by two commentators in the same edition of the newspaper on Jan 21, 2017, called for the passage of a Freedom of Information Act.

Within eight months of this new administration taking office, this newspaper, together with two concerned citizens, was moved to demand that the government should make information concerning the public welfare available to the public. The above referenced Editorial went further to point out that this was not simply a call for the media to have access to information concerning the management of the public’s affairs, but that this was an individual right to information that required protection.

I did not pay attention to the contents of the leaked DSH documents, in part because they had been leaked and we had been promised that the actual agreements would have been made public. (I have since been advised that, with Prime Minister Chastenet confirming the authenticity of the leaked documents, we may comment). Neither did I pay close attention to the Opposition’s comments on those documents of December 8, 2016, as those comments were regarded as being premature.

There is another reason however for my not having being overly concerned with the details of those agreements, and it is simply that this DSH project is a fake project, in the same manner that all other projects proposed under the CIP are fake. Not one of these projects is investment grade, and so they all require the selling of our passports for their financing. It does not take any analysis to conclude that the CIP projects will therefore all fail, whether that failure takes place at the construction phase due to an insufficient sale of passports, or takes place at the operational phase when there is no demand for the facilities constructed. Failure of these CIP projects is inevitable, and with this given, I therefore concluded that there should be no need to waste any time on the details of these projects. Was I wrong.

Last week, someone thrust a copy of the DSH Framework Agreement into my hand and suggested that I read it. I did, and received the shock of a lifetime, as there, in that document, is contradiction after contradiction after contradiction of what we have been told by the government. Fortunately, in today’s world we do not have to rely on memory as we have the Internet and YouTube, but sadly, as the Prime Minister jokingly suggested, it would have been better if those leaked documents had been hidden under somebody’s bed instead of being kept in his office and leaked, (paraphrasing), as we could then have continued life in blissful ignorance.

The DSH Framework Agreement is a twenty-page document containing thirty-one clauses that detail the responsibilities of the Government of St. Lucia with respect to the Master Developer. There are few, if any, obligations placed on the Developer by it, but any suggestion that the Agreement is not binding on the Government is absurd, as Clause 16.1 expressly states that: “Each party warrants … that the obligations expressed to be assumed by it under this Agreement and each such agreement are legal, valid and binding and enforceable against it in accordance with their terms …”. Every commitment given by the Government in that Framework Agreement is binding, and if the Government does not think so, then the Agreement itself contains an Arbitration Clause for the settlement of any disputes.

More than that, the Agreement, as well as any dispute arising from it, is to be governed by the laws of England and Wales, not of St. Lucia. Sovereign and independent we are in this 38th year of our independence, and now again ruled by the laws of Great Britain.

Not only, however, is the Government bound by this Framework Agreement, but the even more shocking aspect of this Agreement is contained in Clause 19 which states that “… each party agrees to keep secret and confidential and not to use, disclose or divulge to any third party … any: (a) confidential information relating to the Project; or (b) information relating to the negotiation, provisions or subject matter of this Agreement (or any document referred to in it); or (c) confidential information concerning any party to this agreement.”

There it is. Our government has entered into an agreement that binds it to keep any information relating to that agreement “secret” and “confidential”, so that even when citizens raise objection to the proposals or request more information, all we are treated to is a bland statement from the government indicating that the “Agreement is not cast in stone”. Not only is that Framework Agreement cast in stone, it is also secret and confidential. If there are persons who insist that the Agreement is not binding, then they can only be referring to the obligations imposed on the Developer, DSH, as there are no binding material obligations placed on DSH by that Agreement.

There is also nothing in that Framework Agreement which should be considered confidential, as the only business commitments made have been made by the Government of St. Lucia, and that business is our business. The Agreement contains no particular information pertaining to the developer, DSH, which requires protection.

And to think that while this Agreement has been in force from July 19, 2016, a little over one month ago, in January 2017, this newspaper and two respected commentators were foolishly asking for a Freedom of Information Act to be passed, perhaps not knowing that our government is legally bound to keep secrets from us.

Here now we have a Malaysian developer returning us St. Lucians to the rule of British law, and instructing our Government that it is to keep his business with us a secret from us. And he has achieved this feat simply by dangling a multi-billion dollar project before our Government’s eyes, a project which will be wholly financed by the sale of our passports (never mind that the racetrack is supposedly to be financed by the developer), and then offering to prepare a master plan for the project.

If this shameful behaviour by our government is not hitting rock bottom then I don’t know what is, but the thought that our government can be induced to enter into secret agreements with individual firms, although not new, is terrifying.

Next week we look at that third leaked document, the Ainsworth correspondence, before continuing our discussions of DSH.