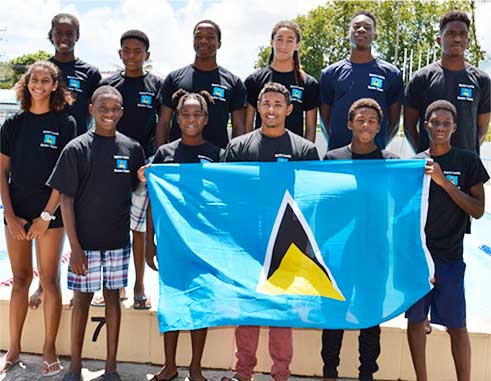 The Bay Gardens Hotel in Rodney Bay will play host to the much anticipated Saint Lucia Amateur Swimming annual Sports Awards tomorrow night under the theme “Just Keep Swimming” where the crème de la crème of local athletes, administrators and volunteers will be honoured for their hard work and achievementsin 2016.

Top swimmers have already been awarded for their sterling contribution in the pool at the recently held 37th national sports awards. Last year’s top Achiever and Junior Sportswomen of the Year Katie Kyle are once again in the mix of things and so to the SLASA Junior male swimmier of the year Jayhan Odlum – Smith. Senior male and female swimmers Jordan Augier and Malaika Casimir will collect the top hon

Meanwhile, SLASA President Carol Mangal has indicated that she is stepping down giving way to someone else to run the association’s affairs. Some of the high points for the outgoing president were the confirmation from the World-governing body, FINA, that they have ratified changes to the SLASA Constitution which included changing the term of the executive to two years instead of one. Therefore, effective this month the new executive will be in office for two years.

For Mangal, 2016 was certainly one of our best years so far. The introduction Water Polo to PE Teachers, likewise reintroducing the primary and secondary school’s swimming championships after two year absence. The hosting of the Goodwill Games over three days, the largest ever hosted at the regional level in Saint Lucia as another achievement.

She keeps her fingers crossed as to the realization of the new aquatic centre which was promised by government, but SLASA has not received any formal communication as yet. SLASA has been advised that the government will in the coming months unveil its strategy for sports and SLASA hope that the Minister for Sports Edmund Estaphane will provide information on the facility at that time.