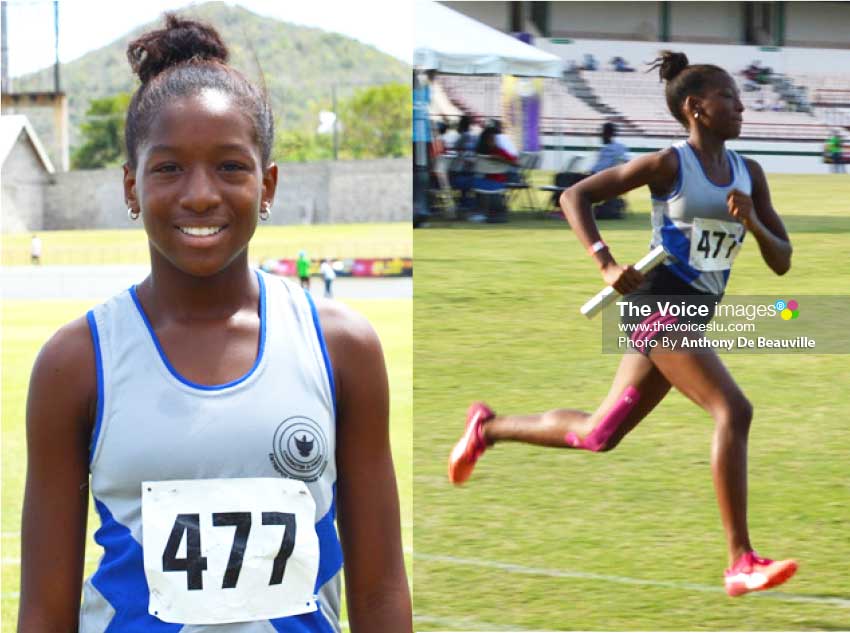 SHE is only 12 years old but already creating a scare amongst her peers in track and field when on the starting line. Her career started at age three and she is a former student of Dame PearletteLouisy Primary School. Her name is Kayla Charles and she is currently a form one student at Entrepot Secondary School.

Kayla caught The VOICE’s attention during her breathtaking 150-metres final at the Mindoo Phillip Park where she represented her school in the Northern Zone qualifier for the Inter- Secondary Schools Games where she qualified in a time of 21.09 seconds.

She is a member of the Survivors track and field club and under the watchful eyes of head coach, Cuthbert Modeste.

She spoke to The VOICE in a recent interview.

The VOICE: What is your favourite subject, why, and what other subjects are you studying presently?

Charles: My favourite subject is Integrated Science because I like experimenting. My other subjects are English A, English B, Maths, Wood Work Technology, Social Studies, French, Spanish, Arts, HFLE, PE, Food and Nutrition and Research Methods.

The VOICE: How did it all start for you in track and field?

Charles: It all started when I was at pre-school. I participated in my school’s fun sports and won two gold medals. I took them home to show my parents. My father, who is a former athlete, congratulated me and told me to continue running because he was an athlete and wanted the same for me. I moved on to Dame PearletteLouisy Primary School where I continued taking part in all track events and won every race. I also represented my school at the Inter-District Primary School competitions until Grade 6.

The VOICE: Who encouraged you to run?

Charles: Both of my parents did, especially my father, Mervin Charles.

The VOICE: Do your parents also encourage you by supporting you at the various track and field championships?

Charles: Yes, I receive 100% support from both of my parents.

The VOICE: Is anyone in your family involved in athletics or any other sport?

Charles: My father is a former athlete and my uncle Julian Charles, a former National, Windward Islands and West Indies B cricketer. During his playing years, my uncle also captained the Saint Lucia and Windward Islands cricket teams respectively.

The VOICE: What other sports have you participated in before track and field, and why the switch?

Charles: I did some swimming at first but switched because my passion is track.

The VOICE: What is your biggest accomplishment in your sports career?

Charles: Attaining the award for Female Sports Person of the Year at Dame PearletteLouisy Primary School, as well as winning gold medals at secondary school and qualifying for this year’s Inter-Secondary Schools Track and Field Competition.

The VOICE: Who are your favourite local, regional and international athletes, and why?

Charles: My favourite local athlete is Julien Alfred and regional and international, Shelly-Ann Fraser-Pryce of Jamaica, because of the determination and confidence they display in ensuring that they win their races.

The VOICE: What is your favourite event, and why?

Charles: At present, the 150-metres because I am able to apply my running techniques throughout the race.

The VOICE: How do you prepare for a championship?

Charles: I prepare for a championship by increasing my training load and learning the various running techniques with my coach.

The VOICE: When was the first time you represented your school, and how many times?

Charles: To date, I have represented my current school at the qualifying rounds for the Inter-Secondary Schools Championship once. But while attending Dame PearletteLouisy Primary School, I represented the school throughout my tenure there.

The VOICE: How were your performances?

Charles: In terms of performance, I have always been in the top three.

The VOICE: How many medals have you won to date?

The VOICE: How far you would like to go in representing your school and Saint Lucia by extension?

Charles: I would like to continue representing my school at Inter-Sec and, obviously, the CARIFTA Games, Commonwealth Youth Games, World Juniors and the Olympics at some point in my career.

Charles: Keys to my success are mainly my continuous training, determination and support from my parents.

Charles: I draw my inspiration from God and my parents.

The VOICE: What is your favourite meal?

Charles: My mummy’s Mac and Cheese.

The VOICE: What do you do during your spare time, when not in training/competition?

Charles: When not in training, I continue to focus on my school work.

Charles: If you believe in your goal, you will achieve it.

The VOICE: What words of advice or encouragement do you have for younger athletes at your school?

Charles: Once you believe in your goal, continue striving to achieve it.

Charles: Oh, yes, certainly. Remember to always put God first in everything you do.