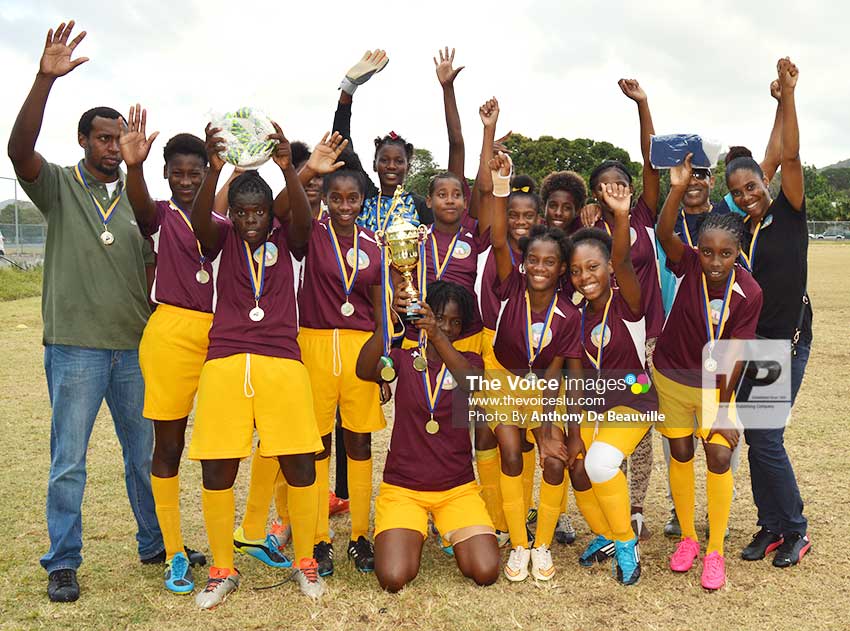 THE 2017 Department of Youth Development and Sports/Saint Lucia Football Association- sponsored Secondary Schools Girls’ Football Championship came to an end on Thursday with the third place and final played at the Sab Sporting Facility.

Under windy condition, the third place playoff between St. Joseph’s Convent and Leon Hess Comprehensive saw the latter winning 2-0 in a penalty shootout with goals from Tanika Bernard and Geean Henry after the score was locked at 1-1 at the end of regulation time.

In the first half, Leon Hess Comprehensive went ahead in the 5th minute after being awarded a penalty, with Tanika Bernard being the goal scorer. However, St. Joseph’s Convent equalized via a goal from Shania Charles in the 15th minute.

The final between, Vieux Fort Comprehensive and defending champions Soufriere Comprehensive did not live up to expectation and hype as the two teams failed to convert their scoring opportunities, resulting in the game ending nil-all at the end of regulation time.

In the penalty shootout, Soufriere went ahead 3-1, with goals from Cassandra Shepherd, Tessa Rigobert and Jahnya Charlemagne with Soufriere goalkeeper, Meggan Nestor, coming up with three big saves for her team.