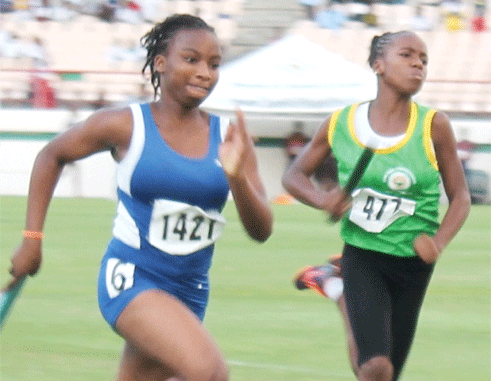 WITH the non-availability of the George Odlum Stadium due to safety reasons, well over 300 student athletes representing the western, southern and eastern secondary schools will compete at the La Ressource playing field in Dennery today and tomorrow.

For the first time the Department of Youth Development and Sports will stage one of two qualifiers for this year’s Inter Secondary Schools track and field Championships dubbed “Southern Qualifier” which starts from 9:30 a.m.

At the end of the two days of friendly rivalry boys and girls champions will be crowned.

Technical Director for the championship Patrick Mathurin told THE VOICE earlier this week, that the championship is a six day meet, spread over a three week period because of the number of athletes. At the final registration there were over 600 athletes in four divisions namely – under 14, 16, 18 and 20 years with two athletes per school in an event in every division.

He also indicated that this particular track and field championship will also be used to identify athletes for the Saint Lucia Track and Field CARIFTA trials scheduled for April 1 and 2.

The organizers have also limited the number of events an athlete can participate in. Each athlete will be allowed a maximum of two field or two track events (individual events) including the relays, 4×100 metres and 4×400 metres.

Meanwhile, the Northern Zone Qualifiers will be held on March 14 and 15 at Marchand Ground and Mindoo Phillip Park simultaneously; while the semifinals and finals will take place at the Daren Sammy Cricket Ground on Wednesday March 22 and 25.