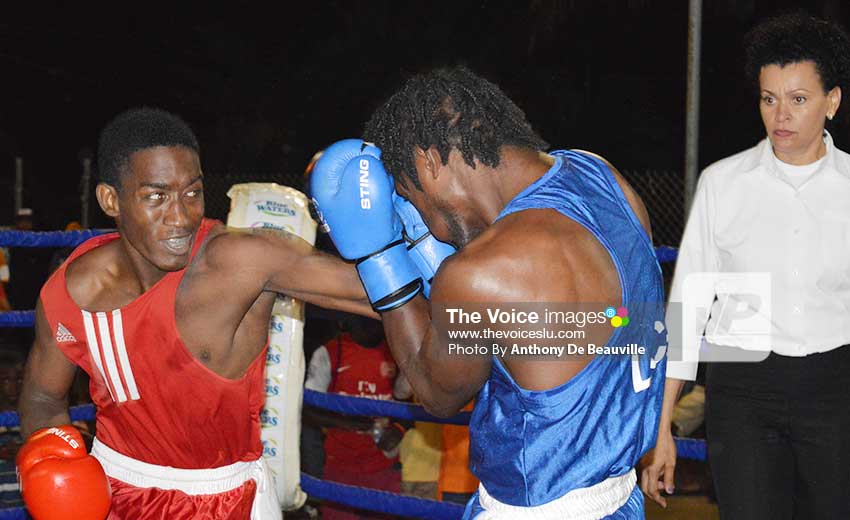 PERSISTENT rain on Saturday evening forced organizers of the Saint Lucia Boxing Association/Babonneau Football League’s first boxing roadshow for the year dubbed “Nuff Cuff” to cut short the event after four of the ten bouts slated on the evening card.

The roadshow is in preparation for the Organization of Eastern Caribbean States Boxing Invitational to be held in Saint Lucia next month.

The first fight featured Jovannus Feverier and Kimlyn Martie. Both boxers exchanged a series of body shots and combinations throughout. Going into the third and final round, Martie was given a standing eight-count by referee Julie Bonnet after receiving a solid right hand to the head.

The second encounter was similar to that of the first. Gold medalist at last year’s Caribbean Junior Championship, Kareem Boyce, showed his class outscoring Devon Layne before he was given a standing eight-count by referee Bonnet in the third round.

The next fight saw junior and senior sportsman of the year, Nathan Ferrari, and Lyndell Marcellin in battle. With no belt or medal at stake, the boxers took on each other as if they were fighting for a major title and a hefty purse.

Many fans who witnessed the action gave Ferrari the victory. But since it was an exhibition match, both fighters were declared winners by the referee.

In the final bout, first-timers Leon Regis and Davie Joseph entertained the crowd as they displayed composure and brilliance throughout their three rounds of boxing.

SLBA President, David Christopher, said the boxing buzz will head back to Balata on March 25 for a second showdown with Ferrari and Marcellin meeting again at that venue.