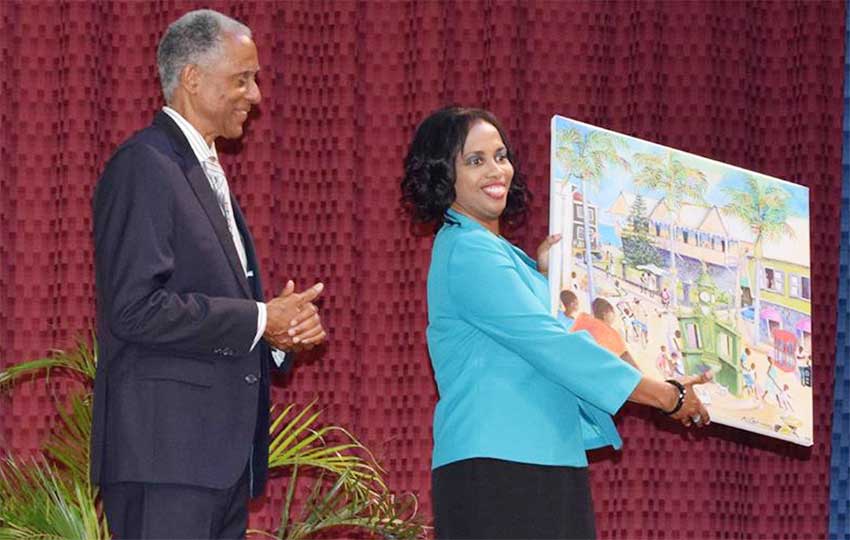 BASSETERRE, St. Kitts : “The people of the Federation, like the entire Caribbean, must jealously guard and protect the Rule of Law,” says the Justice Adrian Saunders of the Caribbean Court of Justice (CCJ).

Justice Saunders’ statement comes in the first of a series of Good Governance Lectures put on by the Government of National Unity as part of public education on good governance and accountability ahead of the government’s roll out of some of its key legislation on good governance including Freedom of Information and Integrity in Public Life.

Speaking at the Eastern Caribbean Central Bank (ECCB) last week on the theme “Laws for Peace, Order and Good Governance: Promoting Democracy, Natural Justice and the Rule of Law”, Justice Saunders said that Caribbean people have come a long way from being “bought and sold like chattel” to regress into the shackles of the mind.

The Rule of Law must be guarded and protected “in part, because as a people, we have come such a very long way in such a comparatively short space of time,” Justice Saunders said.

“Just imagine, less than two centuries ago, that is just about five generations ago, our forefathers were looked upon as nothing. We were bought and sold like chattel,” he said, while citing Rex Nettleford, whom he said referred to the Emancipation Act of 1834 as “our collective birth certificate.”

“That is when we became humans. That’s when in the eyes of the law, we ceased being property and it is from that time that we can count steady and rapid progress in reclaiming our dignity and in having our human rights respected, and that continuous struggle also included a struggle against the yoke of colonialism, such that eventually we won our right to self-determination, so when you look at it in historical terms in less than two centuries, we have come from nothing to proud and independent people,” Justice Saunders said.

Quoting the Barbadian writer George Lamming, famous for his book “In the Castle of My Skin”, Justice Saunders said that Lamming “paints a very vivid picture of the background against which we take up these post-colonial responsibilities.”

Lamming, he said, is quoted as saying that “colonialism was not a physical cruelty. Indeed the colonial experience of my generation was almost wholly without violence—no torture, no concentration camps, no mysterious disappearance of hostile natives, no army encamped with orders to kill—the Caribbean endured a different kind of subjugation. It was the terror of the mind, a daily exercise in self-mutilation. This was the breeding ground for every uncertainty of self.”

Justice Saunders said that remnants of this self-mutilation can still be seen among post-colonial Caribbean peoples.

“A major challenge we still face, as one of our most famous artistes (Bob Marley) has said is to emancipate ourselves from mental slavery, to imbue ourselves with the confidence as every responsible adult who must stand on his (her) own feet. Yes, at times we may wish to emulate or draw on the experiences of others if the example is useful and suitable to our unique circumstances but we need to be firmly aware that we do possess the ability to harness the intellect and we are actually best placed to interrogate our own societies and to determine for ourselves the optimum measures that must be taken to improve it,” he said.