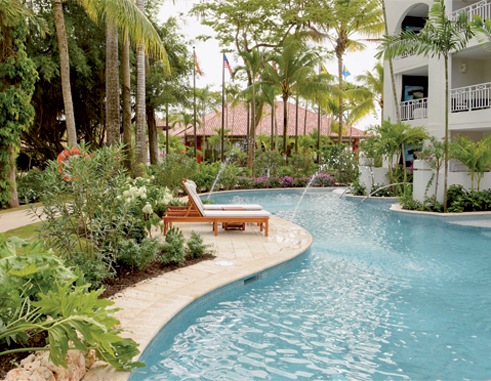 St. Lucia and Barbados Resorts Under Construction This Year.

SANDALS Resorts in the Eastern Caribbean continues to lead the charge in the company’s unparalleled thrust to make available world class resorts for visitors to the region. Building upon its already established track record as the world’s best, and the recently copped top spots in the USA Today 10Best list of hotels, it is literally changing the expectations of Caribbean tourism and hospitality.

The resort chain, which has been in Saint Lucia since the early 1990s, plans – by the end of 2017 – to take luxury to a whole new level in the Eastern Caribbean. In March, Sandals will open phase one of its new over-the-water bungalows in Saint Lucia, marking the start of the anticipated Sandals LaSource St. Lucia. At the same time, it will be winding up construction of its latest gem – Sandals Royal Barbados – in November.

The facilities are both poised to be the envy of the industry, boasting luxury features never seen before, with the global hospitality industry bristling with anticipation.

Reaffirming its presence in the Caribbean, in 2016 Sandals played a key role in contributing to rising tourist arrivals in the islands of Barbados and Saint Lucia, with the former achieving its highest arrival figures yet – hosting an estimated 630,000 long stay visitors. This was a marked improvement from the already record numbers of 2015. Grenada too recorded an outstanding 2016 with yet another record stay-over visitor arrival.

For Barbados, Sandals has been a major factor in boosting its tourism economy which contributes to more than 36 percent of the island’s GDP.

That spells good news for St. Lucia, because even though it has not yet been completed, Barbados is already reaping the rewards of the economic spinoff that has been generated by the construction of the second resort there. Tipped to cost a staggering US$160 million upon completion, the resort will be Sandals’ largest ever investment in a single property, and promises to feature mind-blowing inclusions for guests and over-the-top innovations that have never been seen before in the all-inclusive industry.

Being built in the St. Lawrence Gap, the new hotel sits just next door to the current Sandals Barbados Resort. Construction began some nine months ago and is on schedule for completion in November of this year, with the official opening planned for mid-December. At present, the construction phase is providing employment for about 700 people daily. This figure is expected to increase to between 1,000 and 1,200 workers by the end of March. Remaining true to its commitment to invest in the communities where it operates, 95% of the workforce is made up of Barbadian nationals, in addition to which the resort is being built solely by Barbadian contractors.

By engaging such a significant workforce, Sandals Barbados has made a major dent in unemployment rate on island. With more persons now earning wages, the purchasing power of families on the island has increased, creating a spin-off effect that is being felt by all sectors. The personnel development provided during this phase will also increase and improve employable skills to the local workforce, which opens up further employment opportunities.

When completed, Sandals Royal Barbados will create an additional 600 sustainable job opportunities, increasing the number of persons to be employed by Sandals to nearly 1,200 in Barbados alone.

As construction continues, the linkages being developed has led to immediate benefits for local suppliers. In fact, while some high-end material will be sourced from overseas, Sandals is ensuring that it works with Barbadian companies to provide all construction materials and machinery, which include concrete and aluminum products, rebar, lumber, metal stud, dry wall, paint, and pavers to name a few.

This boom will be mirrored in Saint Lucia with these linkages growing considerable in both territories upon completion.

Sandals recently celebrated its second anniversary in Barbados, and in those two short years the worlds’ best all-inclusive resort has already left a significant economic footprint which accounts for over US$40 million in taxes, salaries, local purchases and other linkages. Sandals Royal Barbados will not only more than double the resort’s contribution to the local economy, it will further position Barbados, as it continues to do in Saint Lucia, as a unique destination for visitors from North America and Europe.

Sandals is leading an ambitious expansion thrust throughout the region.