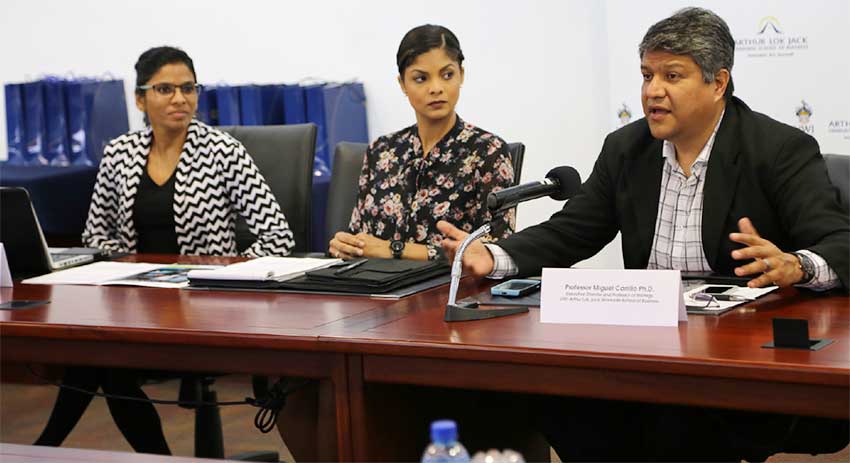 “THE Caribbean region needs to outgrow itself if it wants to develop a growth trajectory that will sustain itself over time,” according to Professor Miguel Carrillo, Executive Director and Professor of Strategy at the Arthur Lok Jack Graduate School of Business.

He was speaking at a recently-held press conference for the launch of Distinguished Leadership and Innovation Conference 2017 (DLIC), carded for May 5 at the Hyatt Regency, Trinidad.

Themed “Inspire. Innovate. Go Global’, DLIC 2017 is in its 15th year and will feature three internationally-acclaimed master speakers, Jim Collins, Sir Ken Robinson and Pankaj Ghemawat, who will coach businesses on how to reinvent their operations to operate globally.

As an added bonus, this year’s DLIC will host a large contingent from the Organization of Eastern Caribbean States (OECS) who will be ready to engage the audience in an insightful panel discussion. Dr.Didacus Jules, Director General of the OECS, gave remarks at the press conference and commented that the DLIC Conference was timely and needed given global and regional contextual issues and the need for regional educational reform.

Prof. Carrillo said: “We need to change the way we think to be able to change the way we do things. As a region, we have to stop being so Caribbean-centric and whenever we think about a new venture or investment, it’s not always enough to see how relevant this will be for Trinidad and Tobago but for the world.”

He further explained that the main driving force behind the decision to bring three of the world’s most sought-after speakers was to address these issues and to tackle the three pillars of growth, namely strategy, innovation and internationalization. These speakers, who are three of the greatest minds in the business world, will speak on topics that have direct impact and relevance for the local economy and the region now.

Leadership expert and best-selling author of ‘Good to Great,’ ‘How the Might Fall’ and co-author of both ‘Great by Choice’ and ‘Built to Last’, Jim Collins will be featured live via interactive satellite on the day. As a lifelong student and teacher of leadership on what makes great companies tick, his books have sold more than 10 million copies worldwide and his research spans over 25 years, allowing him to develop timeless concepts that are widely used by leaders throughout the business and social sectors.

Collins will speak on the defining characteristics of elite companies and the ability of these companies to sustain greatness. He will take an in-depth examination of the importance of creating a culture of discipline in order to succeed and grow.

Sir Ken Robinson, an internationally-acclaimed expert on creativity and innovation and author of “Finding Your Element”, “The Element” and “Out of Our Minds”, will also join DLIC via live, interactive satellite. As the most-watched speaker in TED talk’s history, his 2006 talk, ‘Do Schools Kill Creativity’ has been viewed online over 40 million times and seen by an estimated 350 million people in 160 countries.

Named one of Time/Fortune/CNN’s ‘Principal Voices’, he was hailed by Fast Company magazine as one of “the world’s elite thinkers on creativity and innovation” and ranked in the Thinkers50 list of the world’s top business thinkers. At DLIC 2017, he will show companies how to foster a culture of creativity and innovation in order to derive the best solutions for problems their businesses may be facing.

Pankaj Ghemawat, leading economist and global strategist, was the youngest “guru” included in the guide to the greatest management thinkers of all time published by The Economist in 2008. Joining us live in Trinidad at DLIC 2017, this Global Professor of Management and Strategy and Director of the Center for the Globalization of Education and Management at the Stern School of Business at New York University, Professor Ghemawat developed the DHL Global Connectedness Index, a comprehensive analysis of globalization and the rise of emerging markets. The AnselmoRubiralta Professor of Global Strategy at IESE Business School has written over 100 research articles and case studies in globalization.

Speaking at the press conference launch on Monday, March 13, he stated, “Businesses have to internationalize their mindset. If the T&T economy remains stagnant, there will be increasing unemployment and social decline. Therefore, we need to act immediately.”

At the DLIC conference, Pankaj will teach individuals and companies the true path to becoming global.

For the first time in this region, all three Masters will appear on a Caribbean stage, giving participants the opportunity to learn from their experiences, research, interact and explore inside tips from these global gurus.

Renowned gurus, such as Ram Charan, John Kotter, Professor Michael Porter, Malcolm Gladwell, Marcus Buckingham, Daniel Pink, Dr. Peter Senge, Tom Peters and Donald Sull have graced the DLIC stage in the past to share their knowledge and insights with the business community and decision makers of the region.

Known for inspiring thought-provoking concepts while creating an interactive environment for Caribbean Leaders over the past decade, no other conference in the region has the ability to create such an experience. DLIC has adhered to its commitment to sharing proven success theories, inspiring innovative leadership and creating a path for the development of our leaders by providing a platform for great thinkers to impart valuable knowledge.