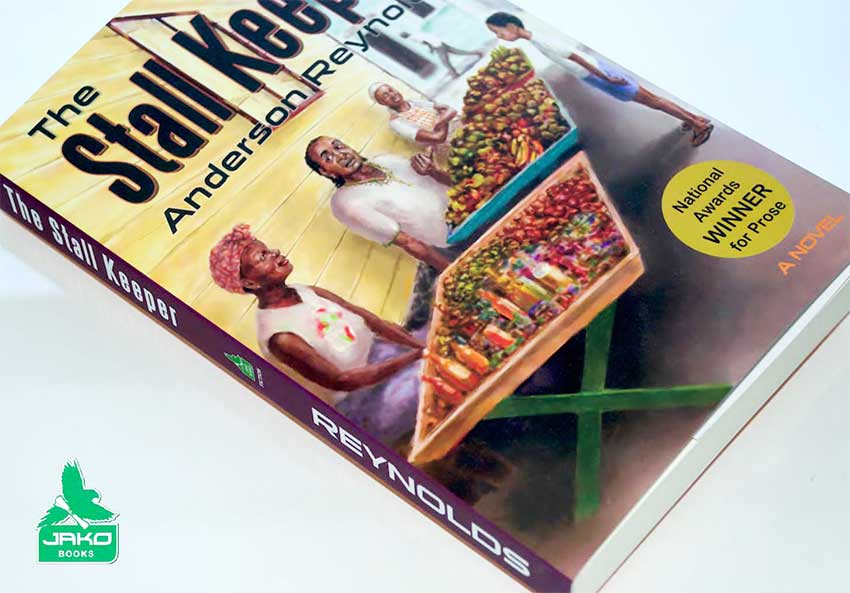 JAKO Books, a division of Jako Productions, has announced the publication of “The Stall Keeper”, Dr. Anderson Reynolds’ long-awaited and much-anticipated third book and second novel.

Unlike Dr. Reynolds’ first novel which was set largely in Castries, “The Stall Keeper” is set in the author’s hometown of Vieux Fort, the southernmost part of the island, and employs the American World War II occupation of the town as backdrop.

The book has already garnered much praise. For example, Allan Weekes, author of ‘Talk of the Devil’, said: “The Stall Keeper is a compelling story of provincial bigotry, coming of age, religious experience and rivalry, faith, fanaticism, the supernatural, frustrated love, and the repression of intelligence and ambition, played against the beautiful wide open spaces and relics of post-American World War II-occupied Vieux Fort.”

Dr. Jolien Harmsen, author of “Rum Justice”, “A History of St. Lucia”, and “Sugar, Slavery and Settlement: a social history of Vieux Fort, St. Lucia, from the Amerindians to the present”, said: “The Stall keeper is a wonderful journey down memory lane for anyone who has breathed the salty sea-breeze of Vieux Fort in the middle and late 20th century… It’s a wry book; a story that sticks in the mind.”

Dr. Reynolds has emerged as one of the country’s most prolific writers. His previous two books were not only national bestsellers but also literary award-winners. An earlier unpublished version of “The Stall Keeper” was also the winner of a literary prize. His feature articles in the Jako Magazine and St. Lucian newspapers have won him two awards for creative journalism and his journalistic pieces on his hometown of Vieux Fort have established him as a foremost authority on the town’s socio-economic history.

The Vieux Fort community will be hosting the official launching of “The Stall Keeper” at 4 p.m. on Sunday, April 2 at a venue to be decided. The event is free and open to the public and besides book reading and signing by the author, it will pay tribute to the late Emmanuel “Bugs” O’Brien and Sir Derek Walcott, and will feature poetry, dance, music, folk drumming, a dramatization of a scene from “The Stall Keeper”, and a short video of the growing body of Vieux Fort literature.

“The Stall Keeper” 280 pages in pagination and costs US$24.95, but is being sold in St. Lucia at EC$60 and will be offered at a special discount price at the launch. The book is available online at: http://www.seattlebookcompany.com/the-stall-keeper/, and in St. Lucia it is now available in Vieux Fort at: T&M Toy Stationery and JQ Plaza; in Castries at Book Salon, Laborie Street; and in Rodney Bay at: Le Cadeau and JQ Mall.