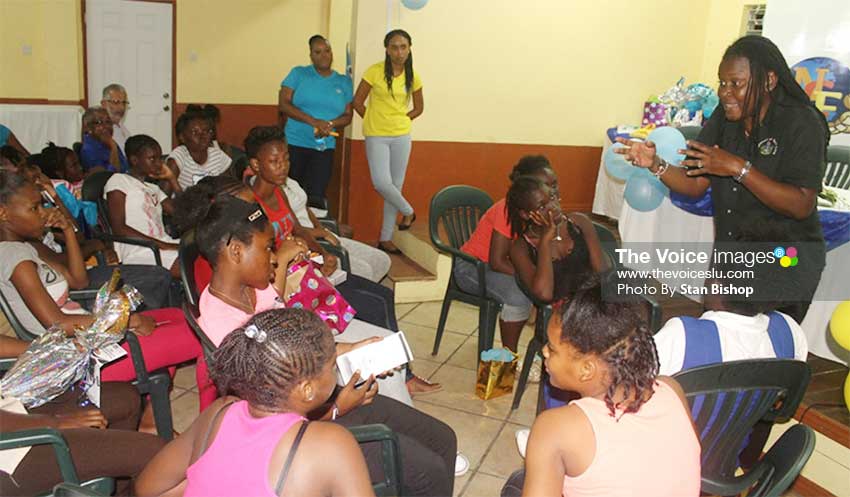 CLOSE to two dozen girls from Jacmel are now the wiser about how to deal with the social ills that might confront them and have a lasting impact on their lives.

On Tuesday evening, the twelve members of the Gerontology Class at Sir Arthur Lewis Community College (SALCC) held an interactive motivational session with the youngsters at the Jacmel Community Centre aimed at keeping them out of harm’s way.

By definition, gerontology is the study of the social, cultural, psychological, cognitive and biological aspects of aging.

Group member, Natasha Chicot, said that with so many young people falling prey to a wide range of societal dangers, the class came up with the idea for the project — dubbed “Tet-a-Tet with Lucia’s Children” – to create awareness.

“We came to the community to empower young girls between ages 12 and 19,” Chicot told The VOICE. “We held discussions with them on self-esteem, self-empowerment, drug abuse, peer pressure and conflict resolution.”

While the exercise was not a mandatory part of their course, Chicot said the class saw it fitting to reach out to the girls given the pervasive social ills that have the propensity to have a negative impact on their holistic development.

Chicot, a Project Officer at the National Community Foundation (NCF), which sponsored many of the gift hampers for the girls, said the class intends to conduct similar exercises in other communities and also plans to target boys. Such exercises, she said, dovetails with one of NCF’s main focus areas — youth-at-risk.

“We hope that whatever knowledge that was shared would be used by the girls to better themselves and their peers. I think that would be a good start to dealing with some of the social ills in society,” Chicot explained.

During the session, the girls were encouraged to ask questions and participation in Q&A exercises for which they were rewarded with prizes. They also got a rare treat from calypsonian, Lady Leen, who led them in singing Ras Shorty I’s “Watch Out My Children”, a song that speaks about drug abuse.