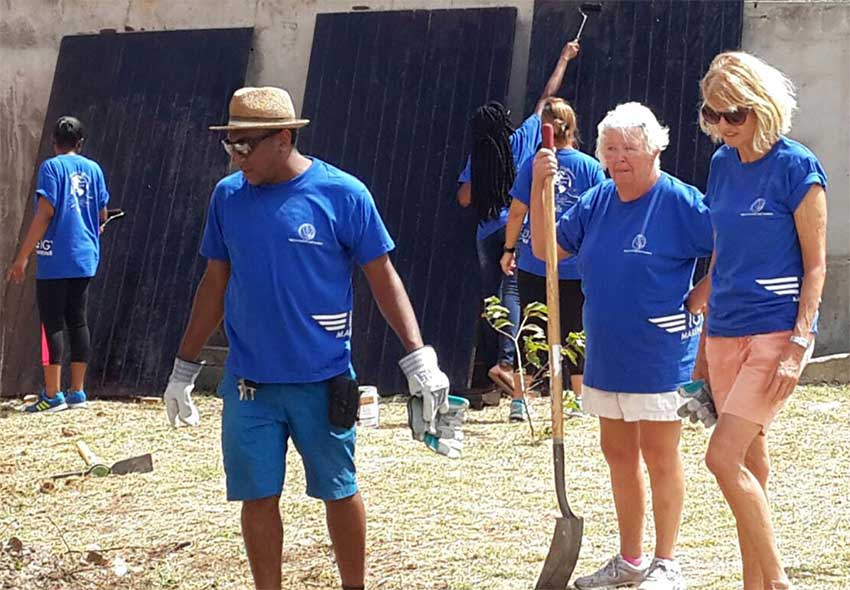 LAST Saturday saw the grounds of the New Beginnings Children’s Transit Home all abuzz with the sounds of busy workmen and women all doing their part to enhance the lives of the children at the home.

They were in fact volunteers who were taking part in the first leg of IGY Marinas’ second annual community outreach initiative “Inspire Giving Through You” which saw over 100 volunteers simultaneously taking part in community projects across six Caribbean and Pacific IGY destinations, namely St. Lucia, Colombia, Mexico, Turks and Caicos, St. Maarten and St. Thomas.

The initiative, spearheaded by the CEO of IGY Marinas; Tom Mukamal; sees IGY team members, captains, crew, owners and local volunteers come together every year on a designated Saturday in February to support several charities within the communities that surround their marinas.

This year the Rodney Bay Marina partnered with the New Beginnings Transit Home in Gros- Islet. The home serves as a safe haven for vulnerable children and teens. Partnering with New Beginnings was essentially an extension of the work undertaken by the marina last year when it partnered with the Boys’ Training Centre. Last year the focus was on a centre in the local community catering to boys; this year it was the flipside with the focus being on a centre catering mainly to girls.

It was a full day affair with a total of 35 volunteers including staff members from the marina, sailors and youth volunteers from the Youth Power Group and the Commonwealth Youth Peace Ambassadors Network, all working vigorously working towards the shared goal. The shared goal being constructing a gazebo; preparing an area for a kitchen garden along with constructing a picket fence; planting flowers and trees on the grounds; pressure washing the walkways and installing light fixtures to enhance the security of the home.

When it was all done, Ms. Avice Charles-Inglis (director of the home), was thrilled to have seen the transformation and was more than grateful, especially for the gazebo which will be used as a visiting area for the families as well as a story time area for the children.

It must be noted that this year’s Inspire Giving Through project would not have been a success without assistance from Carasco and Sons Ltd., the Rodney Bay Marina Taxi Association, Café Ole, Exelsign, Bread Basket, Greening the Caribbean, Lucian Tees, Amazon Landscaping, the Youth Power Group and the Commonwealth Youth Peace Network.