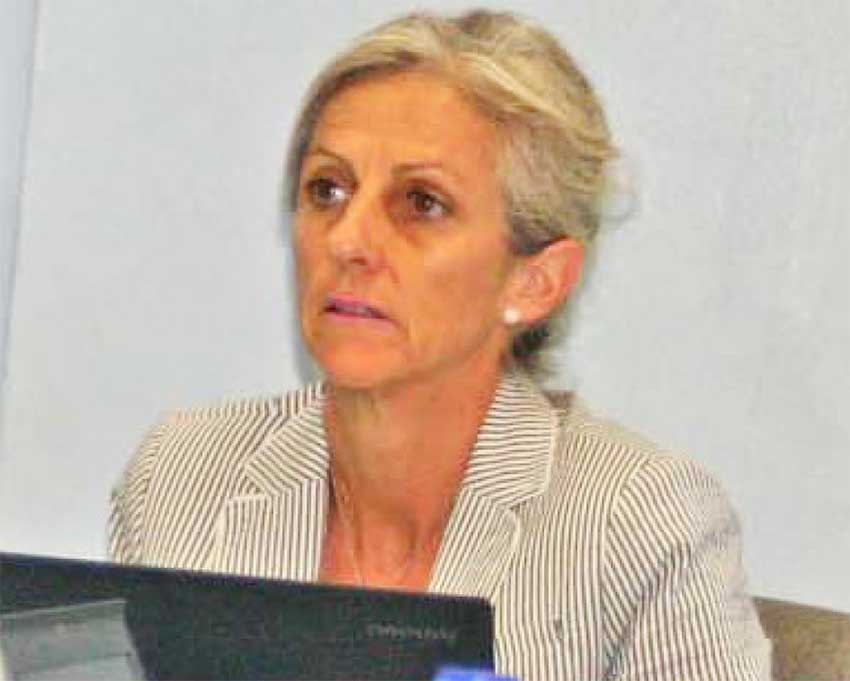 An IMF delegation, headed by Nicole Laframboise has ended a one week visit here undertaking a sixth review of Grenada’s IMF-supported ECF programme of US$19.4 million that was approved in 2014.

Laframboise said overall performance during this last phase of the ECF-supported Home Grown programme has been strong and that the government has made progress toward achieving the key programme goals of restoring fiscal sustainability, strengthening the financial sector, and setting the stage for durable growth.

She said that the government has met all of the performance criteria and structural benchmarks due at end-December 2016.

“All the indicative targets were met, except for a minor under-spending on the World Bank-supported SEED programme because of extra time needed to process candidates under the new eligibility system. “Nonetheless, it is worth noting that the results so far point to an improvement in the effectiveness and targeting of programmes to those most in need,” she said.

The IMF official said that real gross domestic product (GDP) is estimated to have expanded by 3.9 per cent in 2016, implying annual real GDP growth of 5.8 per cent on average from 2014-2016.

She said activity in 2016 was driven by tourism, construction, and some pick up in domestic demand, while agriculture experienced weather-related contraction.

“Growth is expected to moderate to 2.5 per cent in 2017, near its estimated potential. Average consumer price index (CPI) inflation rose to 1.7 per cent in 2016 and is forecast at 2.6 per cent in 2017 as oil and food prices start to rise. With steady tourism momentum, the external position remains stable.”

She said the government achieved a primary surplus – fiscal balance excluding interest payments – in 2016 of 5.3 per cent of GDP and that expenditures were kept under firm control, and tax revenues performed well across all categories, driven by improvements in compliance and administration as well as robust activity.

“Grenada has also taken important steps towards completing the comprehensive debt restructuring started in 2014. Of the stock outstanding at programme inception, over 90 per cent has been restructured.

“Public debt is forecast to fall to 72 per cent at end-2017, a drop of 36 percentage points from its peak of 108 per cent in 2013. This sizeable decline in the debt-to-GDP ratio is attributed to all three key factors: debt relief and restructuring, fiscal adjustment, and strong GDP growth.”

Laframboise said while improvements in economic indicators are noteworthy, there is still much to do to improve job prospects.

She said employment has grown on average by about four per cent annually since 2014, but unemployment in Grenada is high, particularly for the youth.

“Labour force statistics suggest an important skills mismatch in the economy. A review of education curriculums and new labour market programmes to improve training and job search tools, in collaboration with the private sector, would help address this mismatch,” she added.

Laframboise said to achieve broader-based growth, the government is focusing on structural reforms to improve the supply response.
“Based on the natural endowments and market brand, the agriculture sector could be a more important source of growth and employment in Grenada. The authorities are moving toward some liberalization in the sector and staff urges them to continue in that direction.

“The government is also taking steps to remove impediments to doing business, including streamlining property registration processes and customs procedures, and strengthening building quality control and regulation. Further consultations with the private sector in these areas could help identify pressure points to be addressed,” she said.

Laframboise said that despite marked progress, it is important to note that public debt is still relatively high and further effort is needed to reach the medium term target.

“Grenada is a small open economy susceptible to external shocks, including from natural disasters, swings in key tourism markets, commodity price shocks, as well as potential volatility of Citizen-by-Investment revenues.

“With these types of vulnerabilities, lower debt and higher reserve buffers will help the country mitigate the impact of external shocks to avoid output losses and setbacks in income and social progress.”

She said that the Keith Mitchell government has agreed on the imperative of adhering to the strengthened policy framework.