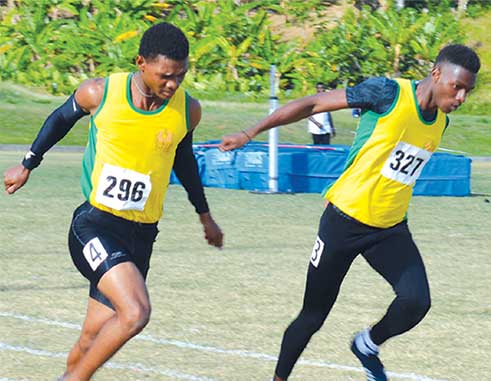 ORGANIZERS of the Inter Secondary School track and Field Southern Zone Qualifier breathed a sigh of relief on Thursday when heavy rain brought an end to the proceedings at the La Ressource playing field but not before some sterling performances were exhibited by athletes from Micoud, Vieux Fort Comprehensive, Beanefield and Choiseul Secondary respectively.

Despite numerous delays and some unforeseen logistics issues, the participating schools were still able to give it their best shot on the day, but the more accomplished athletes, training with their respective clubs certainly stood out.

On the track itself, a photo finish would certainly come into place as to who brushed the tape first at the finish line, but up to press time on Friday, the times were not immediately available. One thing for certain Choiseul’s duo Jeanmeachel Etienne and Kenneth Verneuil brought the house down with a stunning performance in the Under 18 boys 200 metres in one of the better events.

CARIFTA hopeful Kimani Alphonse of Vieux Fort Comprehensive continues her good form winning the Under 18 girls 200 metres. Another VFC athlete Zadie St. Louis ran a race of her life in the 800 metres after she was accidentally toppled over by another athlete with 600 metres still to go. St. Louis had enough fuel in the tank to finish ahead of Darcelle Francis of Micoud Secondary and Andrea Gittens of Choiseul Secondary.

Beanefield Secondary won the girls 12 – 13, 4×100 metres, but what was not expected was that favourite Vieux Fort Comprehensive would lose. VFC’s slow starter gave away too much at the start, Beanefield giving nothing away as they went on to stop the clock at 58.48 seconds to VFC’s 58.72 seconds and Ange Sec Secondary third in a time of 58.77 seconds.

In the boys Under 18 4 x100 relay the Choiseul quartet of Kenneth Verneuil, Alexie Smith, Etienne Jeanmeachel and VigeeMenelik proved too much for the pack winning in a time of 47.04 seconds ahead of Vieux Fort Comprehensive (48.37 seconds) and Piaye Secondary (48.42 seconds).

In the boys Under 14 high jump, Choiseul’s Frayne Peter cleared the bar at 1.40 metres ahead of Ajani Rac of Vieux Fort Comprehensive. In the Under 14 girls division, Imrina Wilson of Micoud Secondary and KenishaAuguste of Vieux Fort both booked spots into the semifinal round of competition.

The girls Under 16, 3000 metres open saw Nicofia Joseph of Soufriere Comprehensive capturing first place ahead of a late kicking Lilyanna Sylvester of Clendon Mason Memorial.. With 60 metres to go Joseph distanced herself from the chasing pack of four other individuals who suddenly faded away in the distance..

With five girls at the starting line, this event should have been made a straight semifinal at the Daren Sammy Cricket Ground. And that is based on the information given by the Technical Director Patrick Mathurin; that the top 6 athletes from each qualifier will be selected.

Meanwhile, the action switches to the north of the island on Tuesday and Wednesday at the Mindoo Phillip Park and the MarchandGrounds .