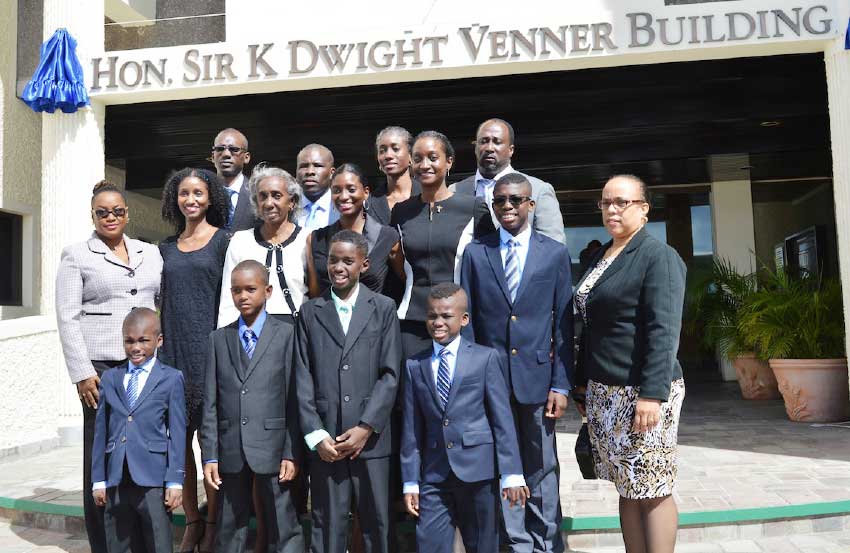 BASSETERRE, ST. KITTS — The late Sir K. Dwight Venner, the second Governor of the Eastern Caribbean Central Bank (ECCB) was honoured here Thursday, when the Bank’s headquarters located here was named after him.

Speaking at the unnveiling ceremony, Ms. Zinga Venner, speaking on behalf of the family thanked the Monetary Council of the ECCB for showing “such great appreciation and recognition for our father’s work through bestowing this honour of naming this building after him. While he is not physically here with us today, he is with us in spirit.”

She added: “Thankfully, he was also aware of this great acknowledgment before he transitioned to the next life, and he was very pleased and touched when he was updating us on this development. I can assure you that he is looking down at us at this very moment with a large smile.”

Prime Minister Timothy Harris revealed that In the early part of 2016, the Monetary Council appointed a legacy committee to put forward “ideas by which we could honour the contributions that Sir Dwight Venner had made, not only to the ECCB but to the Eastern Caribbean Currency Union and the wider Caribbean as a whole”. He said unfortunately, Sir Dwight, as he was affectionately called, passed to the great beyond before the activities that were planned in his honour were brought to fruition. One of such activities was the naming of the Phase 1 building on the compound of the Bank’s headquarters as the Sir K. Dwight Venner Building.

Prime Minister Harris continued: “His 26 years as Governor of the Bank was not an easy road, especially during the aftermath of the global economic and financial crisis. It was a trying time, but with his sterling leadership the banking sector throughout the Currency Union – and the EC currency – remained stable and for that we are all grateful. The Eight-Point Plan that he prescribed to take us out of the crisis is still of enduring value and has remained the blueprint for action by the Monetary Council and its Member States.”

This ceremony coincided with the holding of the 87th ECCB Monetary Council Meeting Thursday, March at the Bank’s headquarters in St. Kitts.

The Monetary Council is the highest decision-making authority of the Eastern Caribbean Central Bank. It comprises eight Ministers of Finance, one from each member government, namely Anguilla, Antigua and Barbuda, Dominica, Grenada, Montserrat, St. Kitts and Nevis, St. Lucia, and St. Vincent and the Grenadines.