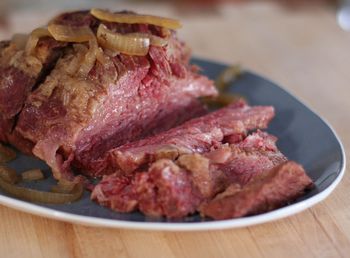 STEMMING from an investigation by Brazilian authorities, a ban has been placed locally on the sale and importation of all beef products from Brazil.

Reports indicate that the violations are limited to 21 packers out of an industry of several thousands. All of the brands of corned beef imported into Saint Lucia originate from Brazil, so the Ministry of Health in collaboration with the Saint Lucia Bureau of Standards, Ministry of Agriculture and the Department of Consumer Affairs, have reacted to this situation by asking that all beef products imported from Brazil be withdrawn from the trade until the investigation by the Brazilian authorities is concluded. Several other countries, such as Barbados, Jamaica and Trinidad, have taken similar action.

Thus far, Grace Kennedy has confirmed that none of their packers has been implicated in any wrongdoing. While the Grace brand has been cleared by its suppliers, we at Peter & Company Distribution are following the directive of the government officials and have asked our customers to remove the corned beef from the shelves and sales of corned beef have ceased until we are further advised by the respective government agencies.

Please note that these are simply precautionary measures and does not mean that Grace corned beef is unfit for consumption. This is a very fluid situation and our government officials are erring on the side of caution to safeguard consumers. Peter & Company Distribution is cooperating fully with the government agencies which are tasked with handling this situation.

On March 21, 2017 an official statement was released by Grace Kennedy on this issue: GRACEKENNEDY LTD’S CORNED BEEF SUPPLIERS NOT UNDER INVESTIGATION BY BRAZILIAN AUTHORITIES

“Grace Kennedy can today confirm that the plants that supply corned beef to us are not under investigation by the Brazilian authorities.

“We have been working non-stop over the past 48 hours to get answers in relation to this issue and can confidently state that the factories which supply corned beef to GraceKennedy Ltd. are not a part of the current investigation by the Brazilian authorities.

“We have reviewed the information provided by Brazil’s Secretariat of Animal and Plant Health (SDA) of the Ministry of Agriculture, Livestock and Food Supply (MAPA) and are satisfied that corned beef is not among the items under scrutiny. Further, none of the meat plants listed by the Brazilian authorities supply corned beef to GraceKennedy Ltd.

“The health and safety of consumers remain of primary importance to us. We have always and will continue to ensure that suppliers conform to internationally- recognized food safety standards, including, the British Retail Consortium Standard (BRC). The BRC is used by leading manufacturers across the world and sets out stringent requirements as it relates to manufacturing, food safety and quality control systems. Our corned beef suppliers in Brazil have consistently qualified for and retained the BRC standard.

“We will continue to comply with the Jamaican government’s temporary ban but also urge that, in light of the information now available, they apply the necessary resources to satisfy any concerns they might still have about corned beef imports as soon as possible.”