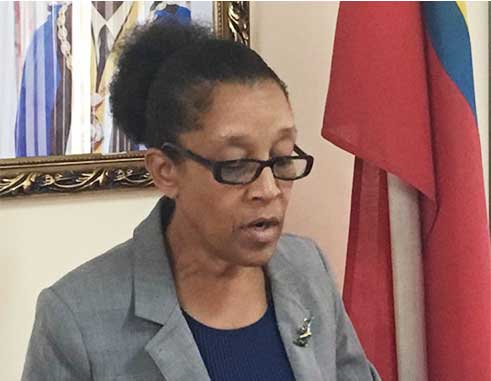 THE Castries Constituencies Council (CCC) is presently being rebranded to reflect the status of Castries as a city.

And one of the first things it has done is to move away from the position of Town Clerk and appointing instead a Chief Executive Officer.

Mayor Peterson Francis explained that it was time Castries, which was elevated to a city in 1967, reflect exactly what it is, a city with a full management team to handle its business.

Anselma Calderon who was deputy mayor from 2 August of last year has been appointed Chief Executive Officer (CEO) and, according to the Council, was picked after a rigorous recruitment process.
Sponsored | Article continues below

Calderon’s last posting in the public service was as Director of Human Resource Development within the Ministry of Education. Prior to that she held the positions of Training Officer and Deputy Director for Training at the Ministry of the Public Service. She was also a Youth and Sports Officer and Director for a Junior Achievement programme ran by the Chamber of Commerce. In addition, she taught for five and three years respectively at the St. Mary’s College and the SDA Academy.

Her duties as the city’s CEO includes assisting with the general administration of the CCC under the direction of Mayor Francis, developing and delivering strategic plans and building on the existing institutional framework.

Her top priorities, will be the management of the organization, the creation of new commercial opportunities, helping to drive revenue, along with an amplified focus on improving the performance and efficiency of the Council.

“Miss Calderon has a proven track record of success… She clearly shares our vision for the future of the Castries Constituency Council,” Francis said.

Calderon says she looks forward to working with all those who are dedicated to the advancement of the Council and the city of Castries.

“I am delighted to have been given the honour of becoming the new CEO of the Council. I am grateful for the opportunity and eager to improve the institution at all levels. I am looking forward to working with the many stakeholders who are dedicated to the long-term development of the City of Castries, she said.”

The CEO is just one of several new positions to be created by the Council as it moves to set up this new management structure for Castries.

Other positions to be filled are those of Financial Controller, accountant, city police chief, a Human Resource manager and a project manager.

“We are bringing in a whole management team,” Francis said.

Peterson explained that several of the projects undertaken by the Council to date are part of the rebranding exercise to improve the city’s environment, its commerce and general outlook.

Some of the projects include the removal of stray dogs, restoration of the city police, a health and hygiene campaign and the proposed installation of parking meters.

“The parking meters will be here in weeks. We have the William Peter Boulevard earmarked,” Francis said.

Refurbishment works are presently ongoing at the headquarters of the Council on Peynier Street as part of the rebranding exercise.