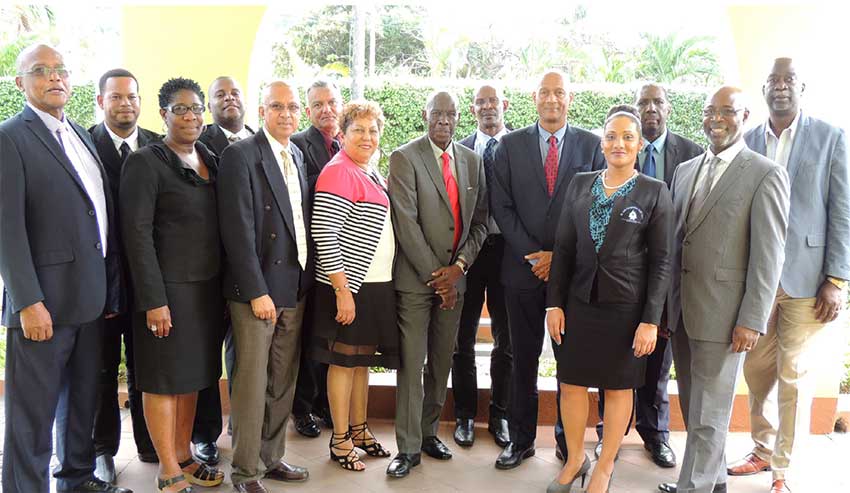 MARCH 24 2017- The St. Lucia Co-operative Credit Union League has concluded a two day facilitation of the Caribbean Confederation of Credit Unions (CCCU) Board meeting in Saint Lucia. This highly productive visit comprised the General Manager for the CCCU along with seven directors, Business Development and administrative personnel. The CCCU is the regional tertiary body which represents all Credit Unions and Co-operatives on an international level within the Caribbean.

During their two day meet, they engaged in a number of meetings and courtesy visits in order to lend an ear to the sector bodies and meet with stakeholders. After a high-level meeting with the National Co-operative Credit Union League and seven of its board members, the CCCU paid a special visit to Minister of Finance with responsibilities for Co-operatives, Dr.Ubaldus Raymond.

Minister Raymond met with four League directors along with the CCCU to specifically speak on the Co-operatives Society Bill, currently being worked on. This particular legislation has created a stir among Credit Unions and the Co-operative sector as many are not pleased with the particulars of the bill. Some calling it “detrimental to the unions”, and openly offered alternatives to the Minister.

The CCCU who represents members from across the Caribbean, provided examples from other OECS member states that are experiencing the effects of this bill which has already been passed in their territories.

The St. Lucia Co-operative Credit Union League’s General Manager, Ms. Christal Charles noted “we are in a very fortunate position now, after hearing the experiences of our neighbours, to make changes to this bill before it is enacted.”

The courtesy visit to Dr. Raymond concluded on a positive note with him agreeing with the CCCU that the local league needs to be more proactive in their lobbying efforts.