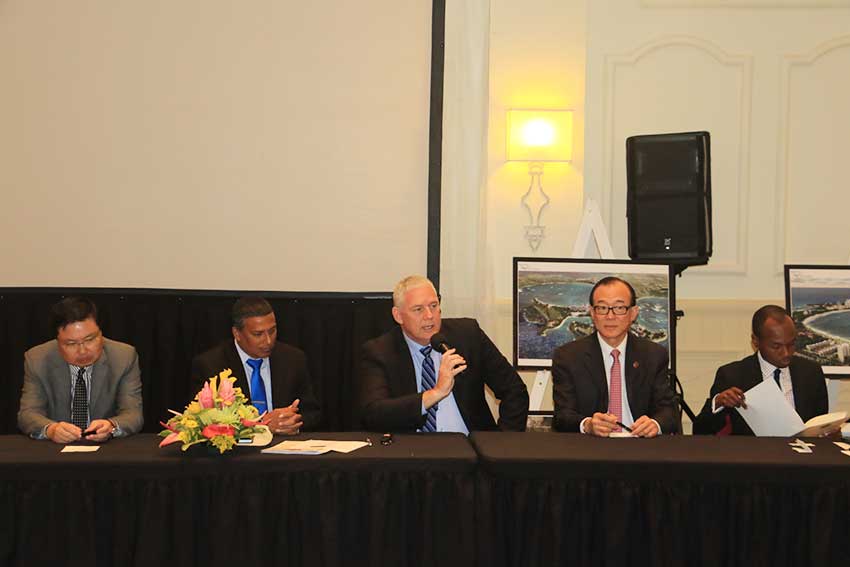 PRIME Minister Allen M. Chastanet has called for Saint Lucians to be “bold and courageous” in the face of new opportunities. He was addressing a briefing on the Pearl of the Caribbean project planned for Vieux Fort at the Sandals Grande last Thursday.

“There are always going to be the naysayers,” said Prime Minister Chastanet toward the end of his address. “The people who can only criticize but never sit back and ask about all the people who are suffering. Do they live in those people’s homes? What does it mean to be unemployed in this country and also to be poor? Shouldn’t that be the priority of what we are trying to do? Does politics have no boundaries? I am asking the people of Saint Lucia to come out and support this initiative. You may not like every detail of it but what we are doing is putting a plan on the table to move this country forward.”

At the meeting were business persons, government officials and representatives from the various town councils in the south of the island. The purpose of the briefing was an update on the “Pearl of the Caribbean” Project by Desert Star Holdings Limited and the unveiling of the proposed phase two of the project.

“It is the intention of my government with what Mr Teo Ah Khing and his team have done to now drive the south in order to take the bold and courageous decisions and to take our rightful place in the world,” said the Prime Minister. “We were elected under the theme of building a new Saint Lucia and we didn’t just marginally win this election we won it with one of the largest mandates ever. It is the intention of this Government to fulfill that mandate. Very clearly specified in our manifesto was the importance of the south.”

The Prime Minister then spoke to the process to come regarding the project:

“It is okay to dream. It is okay to have a vision but singularly the most important aspect of success is implementation,” he said. “It means that somebody has to pull the trigger at some point. So today we are here to announce that this is what the dream is. We intend to have full EIA (Environmental Impact Assessment) studies. We intend to allow the public of Saint Lucia to digest this; to determine what they like and what they don’t like; to get the feedback from the south and the citizens of the south; to make sure that the plans that we have and the scale that we have is compatible with the capacity of Saint Lucia to be able to grow. Once we are satisfied that we have done those things we must make the decision to implement.”

The Prime Minister went on: “I am going to be appointing a taskforce specifically for this project with various departments to ensure that we do the necessary work but at the same time that we are ready to implement this project as soon as all the work has been completed. Saint Lucia it is time for us to take control of our own destiny. Let us stop living in mediocrity. Let us develop our assets for all the citizens in the south and for Saint Lucia. The time for change is now.”

During his presentation Chairman of DSH Teo Ah Khing spoke to the audience about the potential benefits in the reclamation of land near Maria Islands in the south.

“We are going to do three things in relation to the islands,” Teo Ah Khing noted. “We are going to continue to preserve, enhance; do detailed research on all the existing wild life and marine life on this island. Secondly, we are going to allow local tourists to be able to experience the very rare natural features right out there in the ocean and allow it to be a tourism attraction added onto the already interesting attractions in the island Saint Lucia. Thirdly, with the creation of this 150 to 200 acres of new land certain portions will be returned to the people of Saint Lucia. This is not just about the public parks or ocean parks that the visitors are going to enjoy; this is to allow us to put ourselves on the world map for the international research of wild life.”

Mr. Khing stated that what was being shown to the audience was a very preliminary artist’s impression. Pointing to the drawing, the DSH Chairman said: “You notice there are two islands, the Maria Islands. They are completely preserved with isolation and preservation.”

Following the presentation Guy Joseph, Minister for Economic Development, Housing, Urban Renewal, Transport and Civil Aviation addressed the audience followed by the Dominic Fedee, Minister in the Office of the Prime Minister with responsibility for Tourism, Information and Broadcasting.