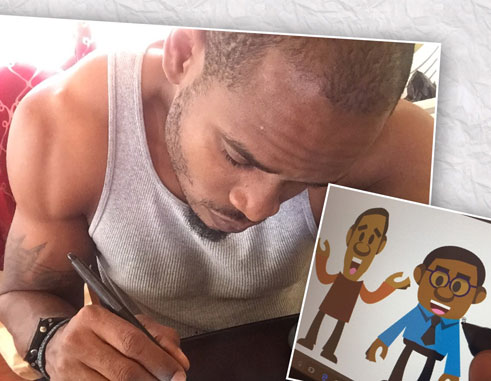 The name Ted Sandiford and ACID Kreations has become synonymous here in Saint Lucia with animation, graphic design, photography and film. His work has been featured in workshops, national expos, competitions and film screenings across the island and around the world. He’s known for using his lovable cartoon characters to not only bring humor and excitement to the masses via commercials and short films, but also to educate and raise much needed awareness to situations affecting the nation such as bullying, drug and sexual abuse, etc.

Recently, Sandiford embarked on a new challenge, the “Principle 10 Video/Animation Competition”. The competition, that was right up his alley, encouraged participants to produce a three (3) minute video voicing the importance that the rights of citizens to access information, participation and justice regarding environmental matters are upheld.

His decision to take part in the international competition was not just to win the attractive prizes up for grabs but also to inform the nation and the world on how important Principle 10 is for safer environment for all.

Sandiford admitted that he had gained immensely from participating in the competition, “I didn’t even know about Principle 10 before the competition. It is extremely important for us to be sensitized with what is happening in our environment, especially with all those hazardous chemicals getting exposed into our atmosphere every day and careless developments being proposed world-wide. ”

The message according to Sandiford is clear, “it’s our environment and we have a right to know what is happening in our environment.”  To help convey the message he solicited the help of his two main cartoon characters, Cocoboy and Girard and introduced a new female character to the fold.

The sole participant from Saint Lucia hopes that island gets behind Principle 10 as according to him, “we have the power to enact positively on our environment.”

Principle 10 seeks to ensure that every person has access to information, can participate in the decision-making process and has access to justice in environmental matters with the aim of safeguarding the right to a healthy and sustainable environment for present and future generations

Principle 10 was adopted 1992 as a part of the Rio Declaration, stating that:

“Environmental issues are best handled with participation of all concerned citizens, at the relevant level. At the national level, each individual shall have appropriate access to information concerning the environment that is held by public authorities, including information on hazardous materials and activities in their communities, and the opportunity to participate in decision-making processes. States shall facilitate and encourage public awareness and participation by making information widely available. Effective access to judicial and administrative proceedings, including redress and remedy, shall be provided. “