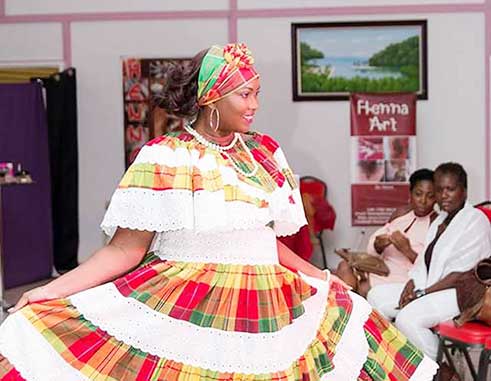 St. Lucians are both famous and infamous for numerous things, one of them being the fickle nature where one minute they love you, and the next minute, they either hate you or are simply tired of you.

Something that has seemingly fallen victim to that fickle nature of the people is local dance. In the past, local dance was something that would bring tears of pride to the eyes of those who got to witness the art form, and it was also an activity that many a young dancer would only dream of being selected to do.

Cut to today, and it is not uncommon to hear people moan about the lack of evolution of local dance, and often complain about seeing the same thing being done over and over again.

Well today’s WOTW is here to open the eyes of those who have fallen asleep on the art form.

Olivia Sampson has been a dancer with the Silver Shadow dance group (the oldest local dance group in St. Lucia with a span of 24 years) for the past 15 years.

The Corinth resident is also a certified theatre arts teacher for both Primary and Secondary school certified by UWI, and is currently pursuing teaching career by going to Teacher’s College to become an art teacher, as well as the head and founder a junior carnival band and of Visual Impact Dance Academy (VIDA Named after her daughter and herself who both have the same name).

Sampson’s journey with dance began when the Silver Shadow’s group leader Barry George, came to the Entrepot Secondary School where she attended, to recruit dancers. Since then, she said: “My first trip out of the island was through Silver Shadow. Travel, dance technique and everything I know came through Silver Shadow. Through all of this theatre and drama, I can express myself freely. I can be loud sometimes but I’m very shy when it comes to the stage, but when it comes to group settings, I’m fine. Silver Shadow has brought out so many hidden talents that I did not know I had, including talking to people, dancing on the stage and being focused on everything around me. They also pushed me into having my own dance troop and Junior Carnival band.”

The VOICE raised the question about the seeming lack of interest in local dance which has rendered it boring and cliché, with that, she said: “Dance troops are dying because they don’t know where they came from or where they are going. With dance or theatre, you must first understand the traditions that we hold. Culture is ever changing but with traditions, you learn where we are, where we came from which shapes where we are going.”

She continued that there are many misconceptions with dance like the one where people think that one must learn ballet in order to dance, but she said it is not so. Sampson said: “If you realise, all our African and Afro-Caribbean movements stem from the earth…that’s where we get our energy and I learnt that through Silver Shadow. If we learn the basics in that kind of dance, we can go very far even if you don’t do ballet, because you will have body alignment and positions that will see you through, no matter what type of dance you do.”

The dancer went on to say that locals have allowed the St. Lucian culture to be watered down to the extent that is will soon be completely foreign.

Sampson said, we need to reverse this: “Like I said, culture is ever changing, and we are adopting a culture which is not ours, and therefore we are losing our tradition. So we should start from the schools…as young as preschool, where we teach our children our tradition, not societal culture, but our tradition, out tradition where we came from, what the dances mean, where they came from and importantly, our songs that play a big part in our dancing. We must learn all these aspects in our traditions so we can move forward in the world of dance.”

She said the group has done its part to keep the tradition alive and thriving at all costs, throughout the year. Some of those efforts include the resurrection of the masquerade dances with Papa Jab, the Dame Lorraine, the Jab Jab.

Sampson said: “We are continuously educating ourselves on our traditions, and if people were investing in dance and theatre on the island, they would know these things, but they only speak out because they do not come out to support the young people in what they do.”

For her part, Sampson said she is poised to be part of the difference in the world of local dance. She has already seen success from her five year old group by producing two queens, two first and third runner ups in pageantry through the talent of drama and dance, and the girls are also being pushed into public speaking and to use the dance group as a format for small business management.

She said her focus is to help the young ladies discover their passion for the art form and the local tradition. “The future of dance in St. Lucia is quite bright! With young persons as passionate as I am like Barry George, Trevor King, Jermaine Alexander, Tennail Thomas, it is growing, and if we put our best foot forward and come together, dance here can be very bright. If we continue producing and teaching our tradition, “Dance” in St. Lucia looks promising.”