Vieux Fortians have seen it all before, and maybe that’s why with the DSH development they are drawing a line in the sand of Pointe Sable Beach, and saying enough is enough. And who could blame them. For the history of the people who occupy the district with arguably the most usable land is one of landlessness. 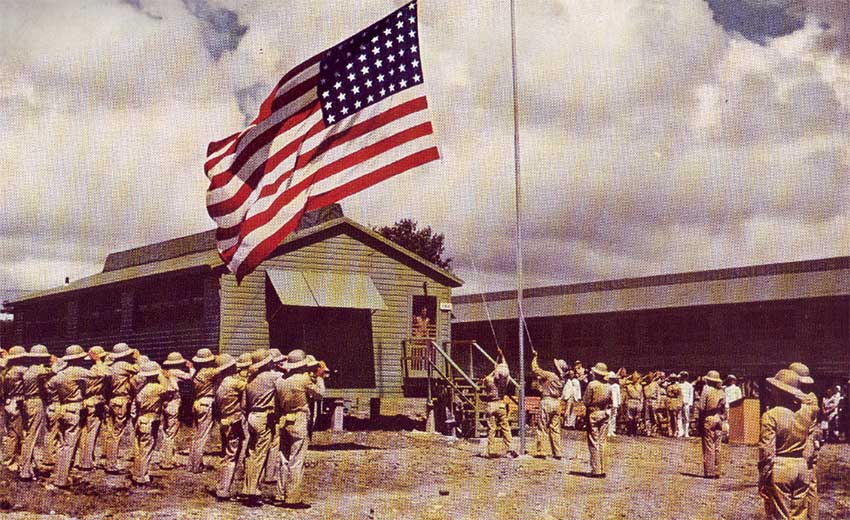 First came the Europeans who decimated the Caribs, the people they found there, and eventually turned the Vieux Fort area into sugar plantations worked by African slaves, the forebears of most Vieux Fortians, such that by 1769 over sixty-one sugar estates were operating in the Vieux Fort area, accounting for over half of the island’s sugar acreage. Later the Vieux Fort Central Sugar Factory, the first in St. Lucia and one of the first of its kind in the Caribbean, replaced the sugar mill. Of course the issue of land ownership for the Africans was mute, after all they were slaves.

Emancipation came in 1838, but the sugar plantations survived slavery, so the ex-slaves in the Vieux Fort area remained landless. In 1937, the Vieux Fort sugar factory closed down, rendering seven thousand people jobless and leaving the sugar lands idle, Vieux Fortians remained landless because they could not afford to purchase the land and they couldn’t cultivate it for it still belonged to the owners of the defunct sugar factory.

Without buyers, the colonial government was left with little choice but to purchase the land from the sugar factory, and later sold the land to the Barbados Land Settlement Company who would operate the factory and resettle 2000 land hungry Bajan settlers, while Vieux Fortians remained landless, but maybe not jobless, because they may find employment with the Bajans.

However, in the middle of this Bajan settlement scheme, World War II broke out. In exchange for reconditioned warships the Americans leased from the cash-strapped and war-weary British all of three thousand and thirty-one acres of the plains of Vieux Fort for a military base. The American base subsumed the sugar lands so the Barbadian Settlement Company was dissolved, and the settlement scheme aborted. And any hope of displaced Vieux Fortians owning land grew even more distant because the Americans occupied the plains of Vieux Fort even more extensively than the sugar plantations.

The Americans gave up the lands in the 1960s during the George F.L. Charles administration, but the land reverted not to Vieux Fortians but to the government, so the people still remained landless, living as squatters on land that either belonged to the Roman Catholic Church, the Anglican Church, or the government.

In modern times Vieux Fort’s expanse of flat land combined with its air and sea ports and American leftover road infrastructure has attracted many more large enterprises—Hewanorra International Airport, the Free Zone, industrial zones, the Fishery Complex, Halcyon Days Hotel turned Club Med turned Coconut Bay, the national stadium, and more. For most of these enterprises Vieux Fortians had no more say in their establishment than they had in the establishment of the sugar industry, or the enslavement of their forefathers to serve the sugar plantations, or the establishment of the American military base, and these initiatives were not designed to necessarily serve their interest.

Today the choicest pieces of Vieux Fort’s remaining real estate is vested in Invest St. Lucia, which is intent on selling the land mostly to foreign investors at the apparent exclusion of local entrepreneurs, leaving Vieux Fortians landless. And here comes Allen Chastanet joining forces with Invest St. Lucia, to literally give away the best and most sought after of Vieux Fort lands to a foreign developer, without any consultation with Vieux Fortians, without any input from Vieux Fort entities and community leaders, with no clear indication of what is in it for the people.

In a meeting with his rank and file Labor Party supporters to expressly explain why his government hadn’t signed the DSH agreement, the former prime minister’s main argument for Vieux Fortians to oppose the development was that it would hem in Vieux Fort, precluding the town from expanding eastward, because the lands would be lost to Vieux Fort entrepreneurs forever. It was an ironic argument. The audience probably didn’t laugh at the former prime minister either because they were diehard supporters; or noticing how deflated were he and the other three LaboUr District Reps in attendance, they didn’t want to add to their grief; or just maybe they could recall that indeed Dr. Kenny Anthony’s administration fostered a kinder and gentler country, providing universal education, laptops for all secondary school goers, electricity, water and telecommunication to every nook and cranny of St. Lucia, footpaths, renovation and the building of health centres, IT centres, and police and fire stations, and they could also recall that if there were any aberration to the landlessness of Vieux Fortians it would have to be credited to his administration’s efforts to make affordable land available to Vieux Fortians. The former prime minister’s argument was laughable, because whether or not the lands are given away to the Chinese or any other developer, Vieux Fortians will still not have access to them, they would still be hemmed in, because the lands are in the hands of Invest St. Lucia, a Kenny Anthony creation, who while ignoring the proposals of local entrepreneurs stand ready to give the land away to foreigners.

Another aspect to this DSH project that Vieux Fortians probably find hard to swallow, is that while the prime minister is cheerleading Teo Ah Khing as a master developer extraordinaire, most of the activities in the DSH plan have been proposed by Vieux Fort business persons and organizations. Indeed, the master developer has seemingly piggybacked on previous Vieux Fort development plans. It’s years now the Southern Equestrian Association (SEA) has been pushing for a proper race track and accompanying stands and fencing that would allow for gate fees and organized betting. Business man, Neil Beepat, has a multiple hundred page proposal for an auto race track paired with upscale hotels and villas, which was presented to Invest St. Lucia sometime ago. The development plans of both Invest St. Lucia and the government’s 2008 Southern Quadrant plan include hotel and other developments along Bois Chandon and Pointe Sable Beach, marinas and cruise ship accommodations along Vieux Fort’s Caribbean waterfront, a university complex around the George Odlum Stadium. In fact, for the past couple years the STDC has been actively promoting and advocating for a marina in Vieux Fort, going as far as hosting marina development symposiums, courting would be investors, engaging marina developer and boat builder, Bob Hathaway, who has developed a detailed marina complex proposal for Vieux Fort that includes a 200 berth marina, 100 room hotel, convention/exhibition center, shopping mall, boatyard, ferry/carenage berth and government (customs and immigration) and marina administrative offices.

In fact, this is one reason some Vieux Fortians were perplexed about the Kenny Anthony proposed $64 million government administrative complex that Allen Chastanet scrapped. Because if that amount of money was available for spending in Vieux Fort, they would have expected it (or part of it) to go towards the establishment of a marina, an enterprise that top their list with regard to stimulating economic growth and job creation in Vieux Fort.

However, government support and encouragement of such initiatives have been far from adequate. If our local businesses and organizations were to receive the kind of incentives, support and concessions DSH is about to receive, there might be no need to set up an entire network of organizations (CIP Unit & Invest St. Lucia) to attract foreign investments, for there may be enough domestic investments to go around.

When a foreign developer simply plops an enterprise on a landscape, sources out its clientele and participants from abroad, the population owning no part of it and are likely to be unwelcome as guests, the enterprise not arising as an extension of the people’s culture, their way of life, and wasn’t motivated by a felt need, and is not integrated into the society, can this be called a development? Isn’t it better that developments, even if on a smaller scale, are initiated by the people, largely for their use and upliftment, they owning a significant part of it? It would seem that, everything else being equal, we would be better off with the latter and thus this should be our preferred approach to development. But sadly, as Invest St. Lucia’s attitude towards local investors and the DSH agreement suggest, the opposite seems to hold true.

It would appear that the government and the rest of the country view Vieux Fort as Americans once viewed the wild, wild West, where land, seemingly endless, was a free for all, that is for whomever could grab and hold on to it. As such Vieux Fort continues to pay a heavy price for facilitating the country. Take for example Hewanorra International Airport. The airport occupies a large portion of Vieux Fort lands which has prevented the town from expanding in unbroken fashion across its plains. Moreover, as is well documented, airports endanger people’s health by the significant level of noise and chemical pollution they generate. In fact, all such enterprises that occupy a significant portion of Vieux Fort lands, including SLASPA, Coconut Bay Resort, LUCELEC, and Invest St. Lucia, are doing so at the expense of Vieux Fortians, and one is tempted to view Invest St. Lucia as a robber baron, selling national assets to fund its upkeep. Vieux Fort seems to be to St. Lucia what African and other non-western countries were to Europe and North America during the era of colonization, when these countries served as sources of cheap labour and raw materials begotten by their subjugation.

As noted in previous parts of this article, in terms of size, land use, and potential social and economic impact, the DSH project brings to mind the American World War II occupation of Vieux Fort and its accompanying social ills—prostitution, spread of venereal disease, dependency syndrome. Obviously, the main objective of developers is to fill their pockets and to earn returns for their investors, so we can’t expect them on their own to take responsibility for addressing these human costs. In fact, the DSH agreements give little consideration to the human aspect of the project such as job training, apprenticeship, opportunities for government and local investors to acquire shares, and the development of the St. Lucian equestrian industry. Instead, as one observer succinctly phrased it, the thoroughbred horses were given more consideration in the agreements than Vieux Fortians.

STDC has presented this concept to the former prime minister, Invest St. Lucia, and SLASPA, but they simply laughed at STDC, as if the concept is so ridiculous it doesn’t deserve an answer. But clearly what can be more reasonable than the notion that the person or entity who caused the harm must be the ones to pay for the correction? After all, the principle of regulation is based on this concept: those who profit from an activity are the ones to pay for the regulation of that activity, those who are creating pollution must be the ones to pay for cleaning the environment and compensating those harmed by the pollution.

The Pearl of the Caribbean is a ten part article on the DSH agreements. Born and raised in Vieux Fort, Dr. Anderson Reynolds is an economist and an award-winning author. His third book, The Stall Keeper, a novel set in Vieux Fort using the American World War II occupation of the town as backdrop, will be published first quarter of 2017.