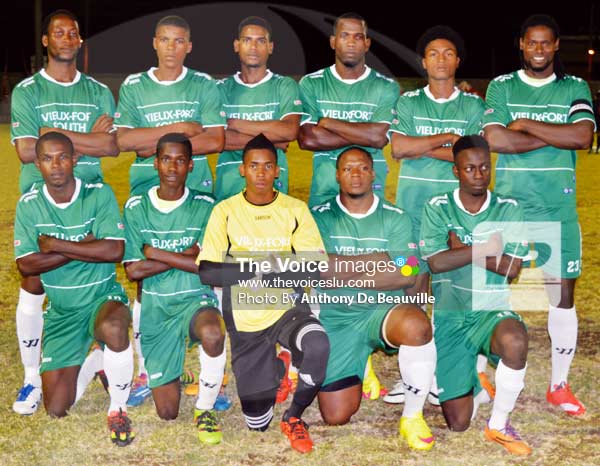 The two teams booked their places in the finals of the tournament for the grand prize of $30,000.00 following victories in semifinals before a massive crowd at the Phillip Marcellin Ground in Vieux Fort on Wednesday evening.

The finals and third place play off of the tournament will be held at the Darren Sammy National Cricket Ground. From 6:00 p.m. Babonneau and Vieux Fort North will play for third place and Micoud and Vieux Fort South will go head on for the championship trophy at 8:00 p.m.

Micoud will be seeking their first hold of the Super League title to make it three consecutive championships within a year. They are currently on a 14 match winning streak; while Vieux Fort South will be looking for their first Super League title following last year’s 3 – 1 defeat in the final at the hands of Gros Islet.

Based on what has transpired thus far in the tournament, the final promises to be a very entertaining.

Meanwhile, in semifinal one, Babonneau and Micoud played to a 0 – 0 draw at the end of regulation time Wednesday after both teams had missed several scoring opportunities. In the penalty shootout Micoud won 4 – 1.

The crowd had grown sufficiently with only standing room available in the stands for the showpiece between arch rivals Vieux Fort North and Vieux Fort South. It was a tight contest as both teams played cautiously and maintained their sharpness by not giving the other any chance to exploit any weaknesses. A few chances were created by both teams which they failed to convert.

The dead lock was finally broken when Vieux Fort North’s standing captain for the evening No.10 Alvinus Myers opened the scoring in the 25th minute with a spectacular 40 yard half volleyed effort which curled past the Vieux Fort South custodian Leon Alexander to give Vieux Fort North the lead.

The loud shouts could have been heard in the distance as Vieux Fort South never or once allowed their shoulders to sag. With their crowd support behind them they continued their quest for the equalizer and did not have to wait too long as captain No. 23 Jamil Joseph’s spectacular acrobatic style bicycle shot eluded the Vieux Fort North custodian Lee Taylor into the back of the nets to make it 1 – 1. The 34th minute goal started a mini type carnival celebration in the stands and that’s how the scoreline remained up until the halftime, regulation time and final whistle of Referee Gordon Wilson.