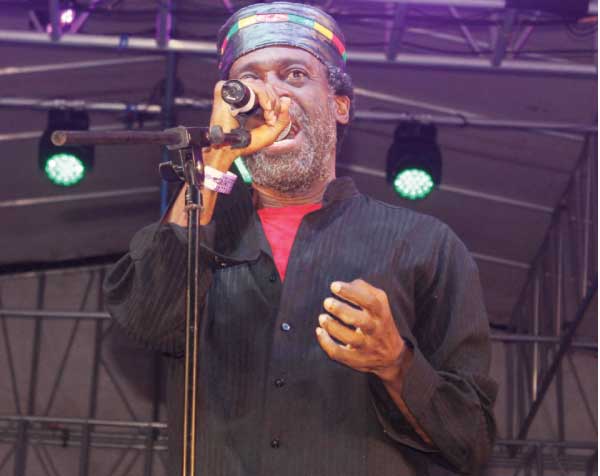 PATRIOTISM is an emotional attachment to a nation which an individual recognizes as their homeland. This attachment, also known as national feeling or national pride, can be viewed in terms of different features relating to one’s own nation, including ethnic, cultural, political or historical aspects. It is rare to find someone who bleeds “blue and yellow, black and white”, offloading his ink cartridge with un-patriotistic revelations, but the truth remains the same whether draped in national colours, political colours or good old common sense.

As the National anthem belted through the speakers at the opening of the 25th Jazz Festival, I stood in awe – proud that I was there from the very first festival and 25 years later, the organisers had worked hard in making this year a silver, sweet and unforgettable journey. As the early jugglers gave us their song and dance, I was proud that the lineup featured a cadre of Saint Lucian talent.

The well-oiled stage was only disturbed by the announcers who seemed to have run out of constructive discourse about the artistes, their backgrounds or musical careers. Their battering of the English language could have been ignored, had it not been for its repeated use and time stalling antics which made the show drag on. In an effort to escape the MCs and stretch my feet for a few minutes, I wandered outside of the Mindoo Phillip Park and OMG! My retinas were assaulted by thousands of Saint Lucians all decked out in Access, Hobie and Basic Blue Shiny objects chocked most females and a heavy police presence brought a sense of peace outside the people’s auditorium.

Noticeably, the organisers were as clueless and ill prepared this year as they were last. The lines stretched for what seemed like 1320 feet. The mixture of all brands of perfume was over powered by a cloud of perspiration which hovered mercilessly over Marchand – but thanks to my ‘all access pass’ I was spared from this malodorous drama. One would have thought after 25 years, Louis and his board would have gotten at least the entry right. They didn’t.

My nostrils took refuge back inside the park – the time was now 1 a.m. A tired menopausal Jamaican who has not had a new album since the early 90’s graced the stage, and again my nostrils were greeted with the nearly legal scent of cannabis sativa. Almost collectively, Lovindeer’s performance meant it was all right to blaze up the high grade. This of course was done by the few elders in the crowd who actually knew the ancient musician. The 80% teeny bopper crowd relished the moment to exchange notes for the spirits of Saint Lucia. Me? Well, between being high by association and bored with Lovindeer’s performance, I repeatedly glanced at my watch which seemed to have gone to sleep as well.

And then it happened! He finally left the stage and the Queen’s English slaughterers were unleashed on the mics again! As they stalled for another 25 minutes taking turns at butchering a language which has been around since the 5th Century, two men in their 20’s set up turn tables (or whatever they use for this electronic wizardry). Then as if instinctively, they played 6 seconds of a song, and the crowd went wild. The music stopped and the MC’s screamed into the mic for another 2 minutes, played 8 seconds of a song, and the crowd swallowed every note. Me? I wanted to pelt my shoe at the stage so they could play at least a full chorus.

Now well past 2 a.m., like a boxer making an appearance in Las Vegas, Mavado, a scrawny man in his early thirties accompanied by an entourage of about 15 people, converged on the stage. Instinctively, the crowd went wild. I thought “wow” – the Saint Lucia Tourist Board really nailed it this year. They catered for the young and the greyed. The Gully God, David Constantine Brooks – a man who has produced albums like Gangsta for Life and A Better Tomorrow, was paid thousands of US dollars to bring the curtains down on what was until then, the most miserable jazz opening in 25 years.

How did he do? Well he didn’t let the Tourist Board down. He was uncoordinated for the first 8 minutes. Muffled inaudible noises came through the speakers and his stage antics were all retarded and tired. But that seemed not to bother the thousands who had forked out $60 a pop to the Tourist Board for this mayhem. Again, I wanted to remove my size 9 Jordans and deposit them on the stage but alas I endured another 12 minutes of this musical misery. As I looked around, I noticed the once thick crowds were parting. Mavado had successfully sickened older patrons into submission. Imagine having several albums under your belt from 2007, countless singles of smut, weed, gangsterism and violence – you are paid to come to small island Saint Lucia and you can’t sing one verse! Not a single full chorus of a song to a crowd who waited hours to hear you.

I say it serves us Saint Lucians right! The Tourist Board milked us, the artistes milked them and the cycle will continue until May 10. We will complain in silence because most of us who beg for a free pass, lack the moral and journalistic fortitude to say that after 25 years, this rubbish needs to stop. As for me, I am going to beg for another pass to another show and I will keep you updated as I am sure it can’t possibly get worse.