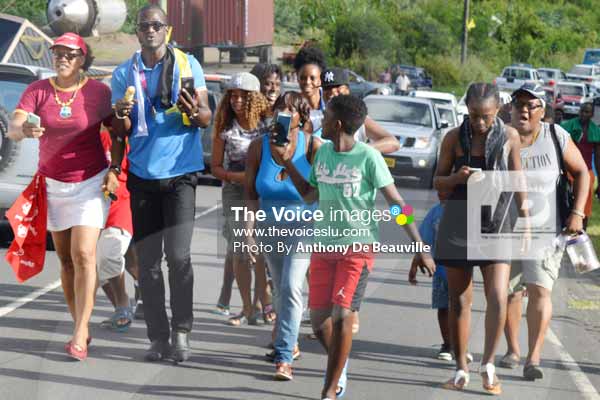 BCG Renamed After Darren Sammy and Johnson Charles Gets His Name on a Stand.

AFTER declaring that there will be a big welcome home for the island’s cricketers West Indies T20 captain Darren Sammy and opening batsman Johnson Charles, the government of Saint Lucia, surprised the two players with amazing news at the Hewanorra International Airport VIP Lounge when they arrived Tuesday.

Sammy’s role in leading the West Indies to the ICC World Twenty20 title has been recognized by Saint Lucia, as it was announced that the island’s main cricket ground would be renamed in his honour.

Sammy is the first international cricketer to emerge from the island having made his One-Day International debut against New Zealand in 2004.

The BCG which has a 15,000 seating capacity, was completed in 2002 and has hosted several international games including ICC World Cup in 2007.

Sammy led his side to glory in a thrilling finish against England in Kolkata, where Carlos Brathwaite hit four successive sixes in the last over to seal a four-wicket win and the championship. West Indies thus became the first team to win the World T20 title twice. Sammy was also the captain when they beat then hosts Sri Lanka in the 2012 final in Colombo.

The Prime Minister said: “My Cabinet believes there is no fitting tribute for what you have done for Saint Lucia and the West Indies than to rename the Beausejour Cricket Grounds, the Darren Sammy National Cricket Ground, the perfect marriage of the person and the facility.”

Sitting left of the Prime Minister, a speechless Sammy just embraced his daughter as loud cheers and applause erupted from the audience in the packed VIP Lounge.

The West Indies T20 opening batsman Johnson Charles sitting beside Sammy, was not left out. He also received a plot of land and will have a grandstand named in his honour.

In his turn at the podium an emotional Sammy, said: “This really touched me. I really want to thank you and your government for this amazing gesture. I am truly honoured and humbled.”

With a smile on his face he said that friends say “Darren you guys get everything in St. Lucia, but just the fortune of having a stadium named after me, it’s humbling and I’m going to cherish it”.

The two cricketers also paid a courtesy call on Governor General Dame PearletteLouisy who congratulated them for the outstanding victory in the final.

The final lap of the journey from Hewanorra was the Derek Walcott Square where they were greeted by thousands of Saint. Lucians and visitors alike.