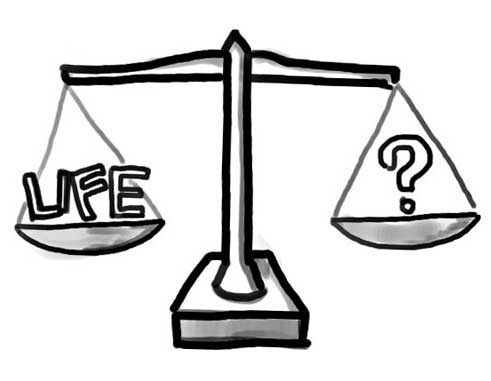 Increasingly these days, questions are being asked about the value that we place on life in this country of ours. We see it in the way some people drive or ride their vehicles, taking risks as though when this life is shut out they can simply order another, the way we would order the next drink or a pizza.

Our criminals, mostly thugs really, are no better. The numbers of homicides and murders especially over the last decade, is testimony to the fact that human life means nothing to many. Only recently, we were brought face to face with a young man already facing a murder charge publicly threatening to shoot a news reporter. True, it was only a simulation, but in the context of the violence we witness in St Lucia these days, does anyone dare say he was only kidding?

Further, look how our suicide numbers keep mounting. When so many of our people are taking the conscious decision to end their lives that way, they too raise questions about the value of human life.

Our lifestyle and the social habits which cause disease and illness and threaten our lives should wake us up to the reality that there are consequences for this kind of behaviour and most times, it is our families and or the state that end up paying for it.

For some time now, we have been hearing of the increasing numbers of St Lucians suffering with kidney problems, mainly as a result of diabetes. But this week, the President of the Diabetes and Hypertensive Association George Eugene must have shocked many of us with the news that there was a shortage of dialysis machines at Victoria Hospital and people were dying for want of treatment as a result.

Eugene revealed that there were 94 patients being treated but another 80-plus on the queue who cannot be accommodated because of the inadequacy of machines. As a result, he said, people were actually dying, some of them under the age 40 because of this situation.

We ask the question: how can this be? How can it be in a country where the government is constantly digging into our pockets, where millions of dollars are spent every year on various forms of entertainment, we cannot spare the resources to provide such vital equipment on which so many lives depend. Frankly, we find this situation most disgraceful.

Granted a dialysis machine does not cost peanuts, but the question is: what really are our priorities in providing services for our people? Is this the way we show that we have regard for human life?

Since Eugene’s statement, there have been several expressions of horror vented over this situation and one hopes that the authorities are taking note. All over the island we are hearing stories of people who have had to travel great distances in search of dialysis treatment all because there are not enough machines to serve everyone. The fact that we have had this spike in the number of persons with kidney problems in recent years means that those whose job it is the provide services needed by our people, have failed us.

To them human life means nothing.