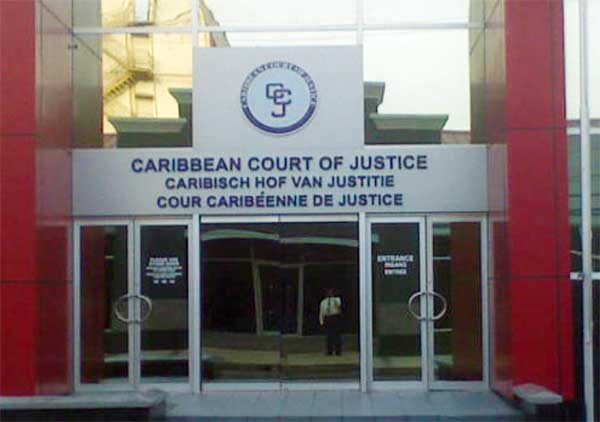 THE Constitutional Reform Commission has said that the Caribbean Court of Justice (CCJ) should replace the British Privy Council as St Lucia’s final court of appeal and that provision should be entrenched in a new Constitution, so that it is afforded similar protection as the Eastern Caribbean Supreme Court in the domestic legal system.

Today, we begin a two-part article on the Commission’s deliberations and conclusions on the CCJ. The final part will appear in our Saturday issue:

The Caribbean Court of Justice
In addition to the direction contained in the S.I. that the Commission should inquire into the means of “maintaining and strengthening the independence of the Judiciary at all levels,” the Commission also took note of the commands that it should “advise and make recommendations concerning the appropriateness or otherwise of maintaining Saint Lucia’s links with the British Crown,” and “advise and make recommendations concerning the patriation of the Constitution.” In the Commission’s view, the S.I. that established the Commission essentially directed it to consider the need to complete Saint Lucia’s independence by breaking ties with the British Crown at various levels, and this included Saint Lucia’s judicial ties to Britain.

In that regard, the Commission examined the judicial provisions contained in the Constitution and in particular, considered the position of the London based Privy Council (PC) as Saint Lucia’s final court of appeal. It noted that during the period since independence, there were two major developments which were likely to impact upon the continued existence of the PC as Saint Lucia’s court of last resort. One was the establishment of the Caribbean Court of Justice (CCJ) in April 2005 and the other was the establishment of the United Kingdom Supreme Court in October 2009. As regards the latter development, the judicial provisions that came into effect in the United Kingdom in October 2009 were part of a suite of reforms that started in January 2004, with the announcement of a Concordat between the Lord Chief Justice and the Lord Chancellor. This Concordat proved a precursor to the enactment of the United Kingdom Constitutional Reform Act 2005.

The effect of this Act was to make provision for the ultimate creation of a Ministry of Justice which would be led by a Secretary of State for Justice and Lord Chancellor. It was the first time that the office of Lord Chancellor would be held by someone who was not a member of the House of Lords. The office was joined with the Secretary of State for Justice who became the Minister responsible to Parliament for the Judiciary. Such a responsibility had previously been held by the Lord Chancellor before these reforms which removed the right to preside over the House of Lords from the Lord Chancellor. Next to go was the removal of the office’s ministerial responsibility for the Judiciary with the creation of a Ministry of Justice.

The final act of dismantling the office of Lord Chancellor, which had a unique position in the British Constitution of belonging to all three branches of government, came in October 2009 with the establishment of the United Kingdom Supreme Court. This Court is led by the Lord Chief Justice and all members of that court ceased to hold their previous positions as Law Lords.

However, the title “Lord Chancellor” still exists as there are many statutes that make reference to this office. Insofar as the Lord Chancellor (who is also the Secretary of State for Justice) and the Lord Chief Justice are concerned, both offices have a Concordat to govern their relations.

The significance of this development is arguably two-fold. In the first case, by undertaking these reforms, the United Kingdom has actually moved closer to the direction of its former colonies in the Commonwealth Caribbean, by establishing a Supreme Court in a similar style and vein to what has obtained in the region, in many respects. At the very least, the establishment by Britain of institutions similar to those already established and operated in the region, implies a high level of confidence, in the types of institutions themselves, and suggests a need for greater confidence in the region’s own ability to operate them.

In the second case, the willingness of the British Parliament to undertake such reforms, certainly raises questions about whether the privileged position of the PC as the final appellate court for the region, can be indefinitely guaranteed. The reforms by the British Government signal a desire on its part to modernise its judicial system and to create an independent, robust court, capable of meeting the demands of the twenty-first century. The dismantling of the constitutional oddity of the office of Lord Chancellor perhaps best embodies this strong commitment to modernisation and common-sense reforms.

In the wake of this Constitutional revolution however, a number of law lords and senior British judicial officials have expressed doubts about the continued reliance by countries in the Commonwealth Caribbean, on the Judicial Committee as their final court of appeal. Indeed, some officials have even suggested that the situation places an undue burden on British judicial resources. Accordingly, these circumstances raise the spectre that the region may be “pushed” before it is ready to leave.

On the other hand, on 14th February, 2001, the Agreement establishing the Caribbean Court of Justice was signed among CARICOM member states. That Agreement came into force on 23rd July, 2003 and the Court was inaugurated on 16th April, 2005. The headquarters for the Court is in Trinidad and Tobago.

The countries that have acceded to its appellate jurisdiction (as opposed to its original jurisdiction in relation to the Caribbean Single Market) and have thereby replaced the Judicial Committee of the PC as their final Court of Appeal are Barbados, Belize and Guyana. Jamaica attempted to do so in 2004 but the legislation that gave effect to the replacement was held to be unconstitutional by the Privy Council itself in the matter of the Independent Jamaica Council for Human Rights (1998) Ltd. v. The Hon. Syringa Marshall-Burnett and the Attorney General of Jamaica 85 in a judgement handed down on 3rd February, 2005.

In any event, the Commission noted that these two developments (the creation of the CCJ and the creation of the United Kingdom Supreme Court) placed the Commonwealth Caribbean at the crossroads of history as regards the replacement of the Judicial Committee of the PC with the CCJ. In that regard, the Commission received and considered a number of submissions that the PC should be replaced with the CCJ. The Commission noted that there appeared to be some general consensus among the Saint Lucian public that the process of completing Saint Lucia’s independence was important and that the abolition of appeals to the PC was an integral and important step in that direction.

The Commission nevertheless considered some of the major arguments in favour of retention of appeals to the PC and against adoption of the CCJ as Saint Lucia’s final court of appeal. The Commission noted that one of the traditional arguments in favour of retention of the PC was that the judiciary of the region had not sufficiently matured to discharge the role of such a final appellate court. The Commission considered suggestions that there was a greater likelihood of political interference in the operations of the CCJ which was not a danger if the PC was retained. It noted further too, that other considerations were that there as yet did not appear to be a widespread consensus among the political elites and body-publics of the region, on the CCJ.

In that connection, the Commission took note of the fact that in late 2010, Prime Minister Bruce Golding of Jamaica proposed that the country establish its own final appellate court. Golding revealed during debate on the Charter of Rights in Parliament on Tuesday December 21, 2010, that the Government was hoping to establish a local final court of appeal to replace the Privy Council. The Commission noted though, that the main opposition party, the People’s National Party, was in favour of the CCJ, which was yet to be established in the Constitution of Jamaica in its appellate jurisdiction.

The Commission was also referred to and considered the Jamaican case of Independent JamaicaCouncil for Human Rights (1998) Ltd. v. The Hon. Syringa Marshall-Burnett and the Attorney General of Jamaica (see above.) It noted the PC’s judegment to the effect that the attempted replacement of the PC by the CCJ, without entrenching the CCJ in Jamaica’s domestic law, had the effect of weakening the level of protection afforded to the Judiciary by the Jamaican Constitution.

However, after having reviewed the facts pertinent to the CCJ, the Commission was unable to agree that the PC should be retained as Saint Lucia’s final appellate court. The Commission noted that, while support for the CCJ as a replacement for the PC varied throughout the region, some jurisdictions, including Belize, Barbados and Guyana, were highly in favour of the Court and had already taken steps to make the CCJ their final appellate court.

More importantly however, the issue was not whether there was widespread support in the regin for the Court, but whether support for the CCJ in Saint Lucia was sufficiently robust. As such, theCommission noted that in Saint Lucia, support for the CCJ among the general public was relatively high, in light of the popularity of the various submissions received to the effect that it should replace the PC. Moreover, the Commission recognised for example, the statements in support of the Court from the late Prime Minister, Sir John Compton. It noted further, that the current Prime Minister of Saint Lucia, Honourable Stephenson King, and the current Leader of the Opposition, Honourable

Dr. Kenny D. Anthony, had on separate occasions, expressed disappointment in the position of the Jamaica Government as regards its stated plans for having its own final court. In the Commission’s view, these facts suggested a strong commitment on the part of both the Government and the Opposition in Saint Lucia for the CCJ