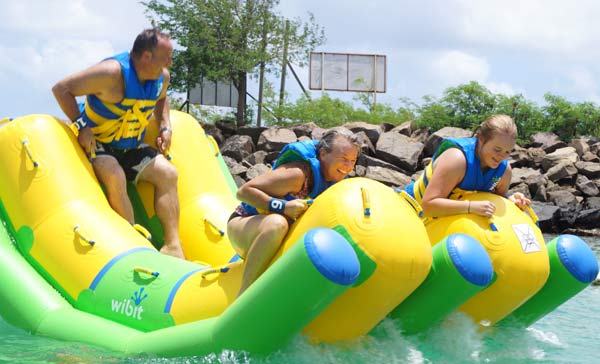 Patterned after the popular game show, American Ninja Warrior, the St. Lucian version will feature a series of fun competitions including water volleyball, relays and time trials and will be held at Splash Island Water Park on Reduit Beach on Saturday November 14 from 10:00 a.m.

Many locals and visitors are expected to flock to Reduit Beach to catch some of the excitement but those who don’t catch it live will now be able to view it on MBC Television (Flow 52 and 120, LIME 27 and 42) who will be covering the contest from multiple camera angles, including from the sky using overhead drones!

MBC Television, the official television station of the popular Blackheart Football tournament has a lot of experience covering and producing high quality sports programming and is excited to be part of this fun and innovative competition.

The announcement of the contest has generated a lot of excitement and interest with several available spots already being taken up by teams from Bay Gardens Resorts, Sandals Resorts, Rex Resorts, St. James Club Morgan Bay Resort and Sharks Swim Club among others.

The park’s Managing Director and founder, Mrs.Julianna Ward-Destang expressed her gratitude to the competition’s sponsors and to the St. Lucian public for their support of the water park. She said: “So far more than 60% of our park patrons have been St. Lucian residents and we are thankful for the support and are happy that the park has been able to have such a positive impact”.

As one can imagine, the teams who have signed up so far is also very excited. Perhaps none are more excited than the team from Splash Island Water Park/Bay Gardens Resorts who recently posted an open video challenge on the park’s Facebook page which has already garnered close to 4000 views.

“Our Ninja Warriors from Bay Gardens Resorts are ready to take on all comers and are eager for a fun filled day of competition,” stated Ward-Destang.

To find out more and to register visit www.stluciawaterpark.com/contests or call 457-8532.