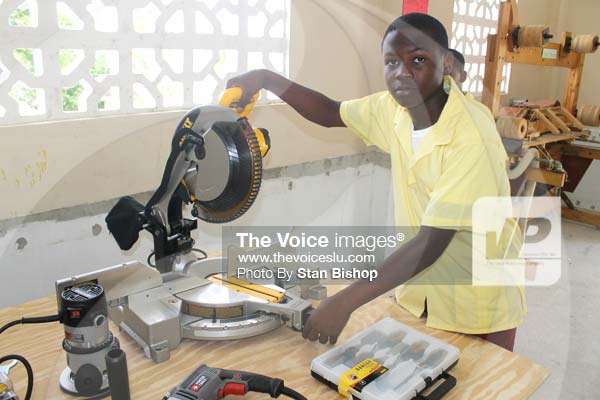 Sponsored
Share this post:
WITH the job market becoming an increasingly competitive environment, even the education system has over the years been forced to adapt its curriculum to meet the needs of that market.

The Soufriere Comprehensive Secondary School (SCSS) is among those learning institutions assiduously pushing to narrow the gap between academics and practical business.

The school held its annual Expo last Tuesday on its compound where the students’ work – academic and vocational – was highlighted. The Expo has a multifaceted purpose which involves the students using the knowledge gained in the classroom and applying it in a tangible form.

Acting Vice-Principal, Marcellus Cazaubon, explained that having the opportunity to display what they have learned is very much gratifying for the students since they get the chance to show the world what they can do practically. The Expo is also used as a marketing tool for the school, he said.

“Around this time of year, we have parents making choices of secondary schools for their children,” Cazaubon said. “As such, SCSS takes this opportunity to show what we do here by touching on a diversity of subjects. This is a school that doesn’t just focus on the academic part of a student’s learning but instead every area of learning and as best as possible.”

The Expo is also used to attract support from the corporate sector since government’s resources are often limited. By being proactive in attracting benefactors and entrepreneurs willing to assist the school, Cazaubon said SCSS is able to get a lot more done.

At Tuesday’s Expo, the students – ranging from Form One to Form Five levels – displayed exhibits that featured projects in Home Economics, Agricultural Science, Information Technology, Art and Craft, Languages, Sports, Business and Health Sciences. There were also musical and theatrical productions by the students.

Cazaubon said the school, which has as its motto, “Steadfast in Work and Example”, has a rich legacy of producing highly-trained chefs for hotels in the Soufriere area. In fact, award-winning Elijah Jules, former sous chef, captain of the Saint Lucia Culinary Team and currently a Chef de Cuisine at Jade Mountain, is a past student of the school.
Sponsored | Article continues below

Fifty highly-trained teachers work alongside the 552 students to ensure that the school remains a dominant force as far and also fares well in culinary competitions, winning the following accolades: SLHTA’s Chefs in Schools Cook-Off Competition in 2014 and 2015 and the Caribbean Junior Duelling Challenge in 2013 and placing second in the Caribbean Food and Nutrition Institute’s Regional Schools Nutritional Quiz Competition in 2003.

On the field of play, Cazaubon said SCSS has dominated the 2014-15 academic year, winning the Award for Sports School of the Year, Under-19 Netball, Under-15 Football, and Under-19 Cricket. The school also placed second in Under-15 Netball and Under-19 Volleyball.

Cazaubon, who previously served as a Commonwealth Youth Ambassador and Public Relations Officer for the National Youth Council (NYC), is also a past student of SCSS. He said the school has recorded a 100% pass rate in Agricultural Science at the CSEC examinations. Students have also done remarkably in areas such as Information Technology and Biology. Additionally, the school placed second in the National Secondary Schools Science Quiz last year.

SCSS, the only secondary school in District 8, is part of the Junior Achievement Programme through which it gets the chance to foster the entrepreneurial spirit of students. Cazaubon said the programme creates the perfect climate for students to become independent thinkers who can spot opportunities easily, adding that the mentorship programme that began last year is proving successful.

Sponsored | Article continues below
“We’ve partnered with hotel managers in our community to run a mentorship programme,” the acting Vice-Principal said. “They come into the school to meet with our Form Four and Five students to let them know quite candidly what skills are required for the workforce. So apart from academic qualifications, students learn that there are other competencies they need to have.”

Part of the SCSS’s vision, Cazaubon said, is to be one of the five top most effective schools on the island, with academia is not being its only yardstick. But by marrying academia with the practical skills necessary for the global workplace, Cazaubon thinks SCSS is on the right path to continuing its successful trends.

“We want to make sure that we take advantage of the Technical Vocational Training that exists and to augment that as much as possible, especially with CVQ (Caribbean Vocational Qualification) coming on-stream,” Cazaubon said.