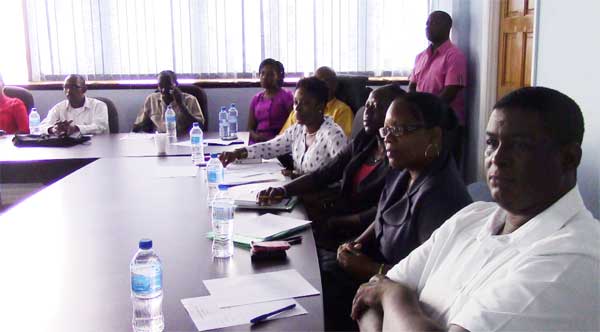 SECONDARY School Teachers of geography recently came together for a workshop to consider, among other things, the future of the teaching of geography in Saint Lucia.

The workshop was organized by the Curriculum Specialist for geography and history, Ms. Selma Biscette, and hosted by InTime Education Television (IETV) the Caribbean’s one and only television station entirely dedicated to education 24/7 all year round.

While others have been focusing on holding meetings, conferences and symposia on the Environment, Climate Change and Global Warming, IETV has been consistently involved in the business of producing educational content on these issues for dissemination among the general public as well as pupils and students in the island’s school.

To date, almost 700 programmes have been produced and are ready for airing at a cost to their producers of some EC$600,000. Without awareness there can be no change. IETV has taken on the task of increasing the nation’s collective awareness of environmental issues by entertaining, engaging, encouraging, exciting and enlightening the populace, starting with the teachers of geography in the nation’s secondary schools.

In this age of environmental awareness, it is becoming increasingly obvious that the range of employment opportunities for those with a sound foundation in all aspects of geography is ever widening. In years to come, as the human race struggles to survive its own understandable rashness, it might well be that geographers will be at the forefront of the charge to save the planet.

The teaching of the revised geography syllabus has already started from September 2015 for CXC examinations in 2017. It is recommended that a minimum of five 40-minute periods per week, over two academic years, including at least one double period a week be devoted to the study a geography, which has three main sections: Practical Skills and Field Study, Natural Systems, Human Systems.

IETV has already produced over 10 series of programmes in readiness for the introduction of the new syllabus in geography:

Upstream is a series of about 70 five-minute videos dealing with minor waterways in Saint Lucia. Although these perennial or recurring waterways may be small, their importance to the environment cannot be overlooked. If not maintained they will turn into raging, destructive torrents in times of heavy rainfall.

Lazy Rivers concentrates on Saint Lucia’s 12 major rivers – each river being portrayed in about 10 separate programmes. The historical, cultural, economic and social roles of these rivers are presented for discussion in the programmes.

Coastlines is a collection of some 50 videos that present a tour round the island’s coastline from air, land and sea and afford the viewer unique views of inaccessible east coast areas revealing coves, bays, shoals, reefs, islands, rock formations and strata never before available to the general public.

My Saint Lucia 1 comprises some 50 programmres in which a young Saint Lucian woman narrates what she sees from a helicopter and comments on communities, commerce and agriculture.

My Saint Lucia 2 is again a young Saint Lucian who narrates what she sees from a vehicle. She comments on the environment, including pollution, abandoned vehicles and houses, visual pollution, drain management, etc.

Highways and Byways is a tour, district by district, along just about every road in the country.

Geogalottery is a geographic, cultural, historic, etc. overview in lottery format of the island’s 238 square miles divided into 167 segments that provide in-depth coverage of approximately 1.5 square miles per programme. No matter where you live, there will be a programme that deals with your immediate environment.

The Environment is a 50-episode narration of environmental issues using footage of Saint Lucia as its backdrop.

Mission Impossible is a collection of 200 “anonymous” videos, with no narration that challenge viewers’ powers of observance to try to guess their location. Clearly for those who have never visited a particular area this will be a daunting if not impossible task. For those familiar with the area, it will be a piece of cake.

Of the 24 secondary schools in Saint Lucia, only 12, just 50% offer geography as a CXC alternative, a situation that is not only sad but regrettable, especially if we are to create a force of people able and willing to take care of our environment in years to come. We need a constant supply of eager, keen, well educated, well informed geographers to help preserve, maintain and sustain our forests, our waterways, our open grasslands, our peaks and valleys; we need a cadre of geographers to revitalize and optimize the agricultural sector, the planning of industrial and commercial enclaves, the expansion of the tourist sector and future urbanization.

In any field of study, the coupling of theory and reality is paramount for success. No amount of study can replace the ability to experience what is being taught. Geography is all around us. Take the Sahara Desert for example that lies far over the horizon in Northern Africa. Then look at Pigeon Island during a serious drought; look at fields drying up through lack of rain; look at the red Sahara dust that has travelled thousands of miles over the Atlantic, carried by high level winds, before being deposited on our homes, houses and buildings. Will Saint Lucia, one day, become a barren, bare rock in the sea?

Geography teaches its adherents to draw conclusions as to why settlements developed in specific places and why some failed while others succeeded. Geography uses a knowledge of science and history to explain why tragedies occurred while others were avoided. Geography can explain why the world is plagued by pestilence, famine, droughts and floods. Geography offers an explanation of the past and is the key to the future.